I was curious to know how many inches my waist had shrunk thanks to all the walking. To find out, I needed to put on my leather belts, tighten them past their final holes, then calculate how many more holes I'd need to punch. Result: for my smaller belt, which was already tight at the start of the walk, I ended up punching three new holes. For my larger belt-- the one giving the "official" measurement-- it turned out that I needed to punch six new holes. I'm impressed in spite of myself: I lost six inches from around my waist.

But I still look fat.

I went to Euljiro 4-ga to look for my belt-hole-punching ajeossi, but he had disappeared along with all the other street vendors in that sector because his street corner had become a major construction site. Disappointed, I turned toward the many hardware stores in the neighborhood and began asking around for where I could find either the tools to punch my own belt holes or a hole-punching service. I discovered the word for the belt-hole-punching tool was peonchi (펀치), and what I eventually found and bought was not the hole-punch I had imagined. Instead of being a staple-gun-style punch, it was a bullet-shaped, hollow-point metal cylinder that you hammer into the leather. I got one for a mere W3500 (about $3 US).

Hammering inside my apartment would have been too noisy, so I took my belts and tools outside and did the foul deed outdoors, amid springtime revelers in the park next door to my building. And now, at long last, I have belts that hold up my pants without forcing me to puff out my gut to keep the waistline up. Feels good. 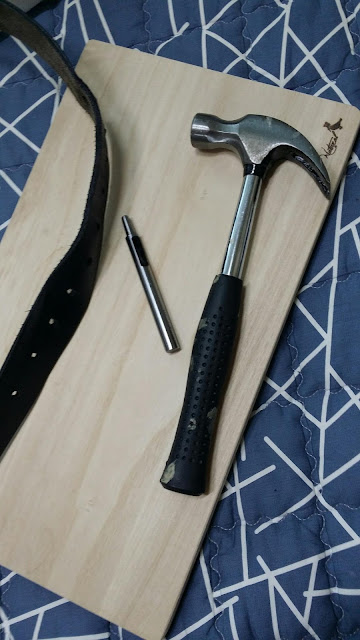 The back of that cutting board, which is made of soft pine, is now a horrorshow. I'm debating whether to just throw the board out and buy a new one. The wood was the perfect density for what I needed to do, though: punching through the belt with the peonchi would have been difficult to accomplish on a hard surface.