There's something about being on the road that draws otherwise reticent people together. Or so I observe: as an introvert, I'm not often inclined to start conversations with strangers, but because I'm a foreigner with a huge backpack, strangers seem to like starting conversations with me.

I met the following two gents while sitting at a rest area, minding my own business. They asked about my backpack, deduced I was on a long walk, then asked the Standard Set of Walking Questions. Because, as linguist Deborah Tannen has pointed out, male discourse involves a game of one-upsmanship, one of the old guys said, "Hey-- look at this guy here." He pointed over to his friend. Not wanting to be rude, I played his game and looked over at the friend (the one I'm standing next to in the first picture).

"This guy walked the entire Baekdu Daegan," he said proudly. The friend just smiled modestly. The guy might have mentioned how many days the friend walked that entire mountain range, but I no longer remember that number.

We soon said our goodbyes. One of the men told me to be careful in his southern accent. Instead of "joshim-hae" (조심해), it came out sounding something like "joshimeu-i" (조심흐의). Despite the grating accent, they were fine gentlemen.  Most of the people I've met on the trail have been nice.

Maybe it's something about trails. In the States, hikers going in opposite directions often greet each other. In Switzerland, hikers exchange a "Grüezi!" or a "Grüß Gott!" I suppose such politeness is natural, a holdover from more primitive days when politeness on the road was a matter of survival.


I've heard plenty of encouraging "Fighting!"s or simple "Annyeonghaseyo"s (hellos) or even "Sugohashimnida"s ("You're working hard!"). These almost always come from people biking up from behind me, so I'm always caught by surprise and often lacking a reply. Sometimes, I manage a lame "Nae!" (yes) in response. People who approach me from the front rarely say anything, although some will nod in greeting when I nod at them. If they ignore me, I whisper under my breath about what rude little bastards they're being. 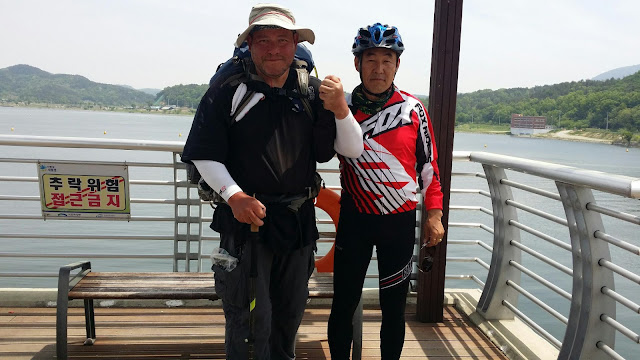 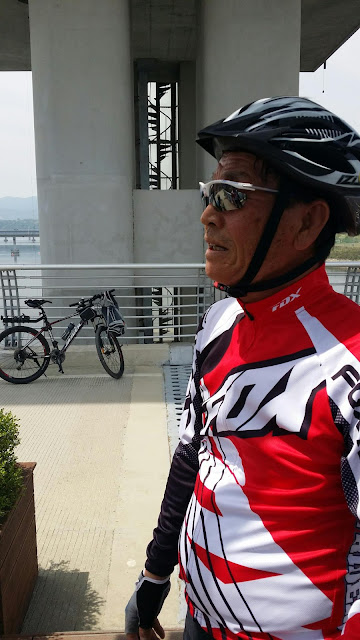