Here's the first batch of photos from today's walk. We begin with major, major equipment failure: my trusty leather belt proved untrustworthy after two weeks of backpack-related abuse. It turns out that the rolling cylinder of metal (see pic) isn't reinforced with metal beneath: the buckle is, instead, a square "C" with the cylinder closing the "C" off. Disappointing to discover. I was able to snap the cylinder back into place, but to do so, I had to bend the square-C part of the buckle. Metal fatigue means the whole buckle could fall apart at any moment. I'm hoping it holds out for another six days. I can no longer cinch the belt to its last hole, which makes the backpack ride more loosely on my back, which in turn puts pressure on my spine. To counter this, I hold my trekking pole horizontally behind my back with both hands and use it to lift my backpack a crucial inch or so-- a technique I discovered a few days into this trip. This relieves the pressure and lets me breathe a little more freely.

Sadly, with the belt compromised, I'm going to have to say goodbye to it when I'm back in Seoul unless I can find someone who repairs belts by replacing buckles. Add the belt to the growing list of possessions that will have to be put down when this trek is over: my backpack is dying, my bandanna's holes are becoming bona fide rips, my cell phone's screen is spiderwebbed, and now my belt is slowly giving up the ghost. This trip has been hard on my equipment.

I didn't take too many pictures during the early parts of today's walk, but I did snap a pic of a street-level roof and a bizarrely pyramidal mountain. I also took a pic of two company guys who fell in alongside me for part of my (and their) walk. They normally walk extremely fast during or right after lunch, doing six kilometers in a single hour.

Flash forward to the final third of the walk, and I've got pictures of various paired guardians: boulders, temple spirits, and even a jangseung with Chinese characters reflecting the name of the local Buddhist temple, Mu Shim Sa (No-mind Temple, "no-mind" being an important concept in Zen Buddhism).

I've got some images of the temple itself. The bike path goes impossibly upward alongside the temple grounds. The steep slope makes this ascent a pro-level trial for bikers. I wonder what percentage of people can actually make the ascent without dismounting and walking. I was thankful to be walking, even though the mountain's various inclines left me puffing. It was a good workout-- a fitting end given that the day also started with a nasty hill that was more intense than anything I'd encountered on the Saejae trail. Today's segment was, in fact, the most difficult leg I've done up to this point, not to mention one of the longest walks I've done this whole trip.

Took a pic of a fat-bellied spider, but upon closer inspection of the photo, I see that the spider's abdomen is rough-looking. Are those bumps the spider's offspring?

Inevitably, I reached the top and began my descent. (What goes up...) Humorously, the other side of the mountain from the meat-shunning Buddhist temple was Cowtown: a village with several cattle-housing units filled with bovines probably bring prepped to become hanu, i.e., Korean beef. The cows were hilarious: when I walked up to take a picture, they shied away, but when I turned around to text a friend, then looked over my shoulder, the cows had all returned and pressed forward to get a better look at me. Look at the first three cow pics to see what I mean: retreat, retreat, advance. Sneaky buggers. The next three pics were of a different housing. 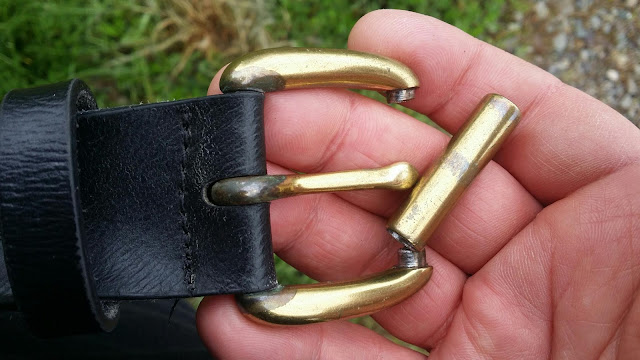 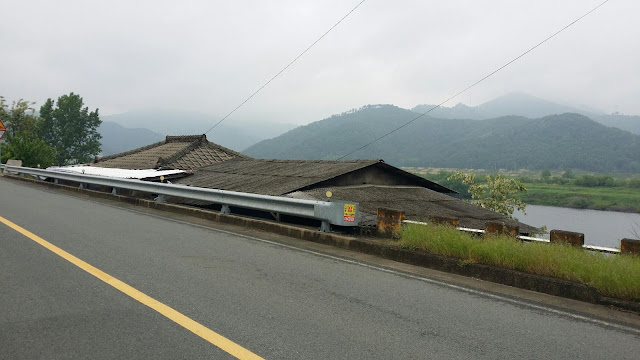 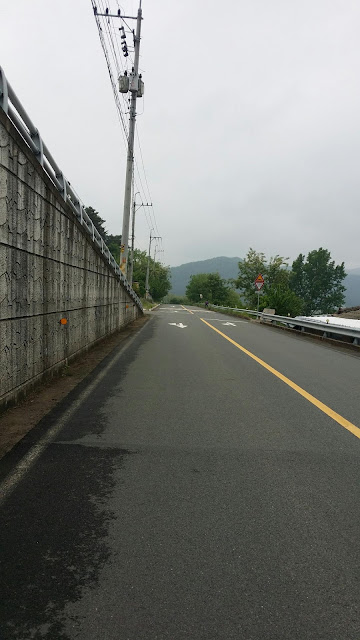 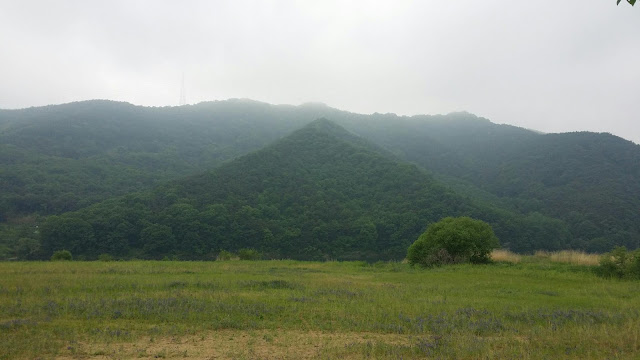 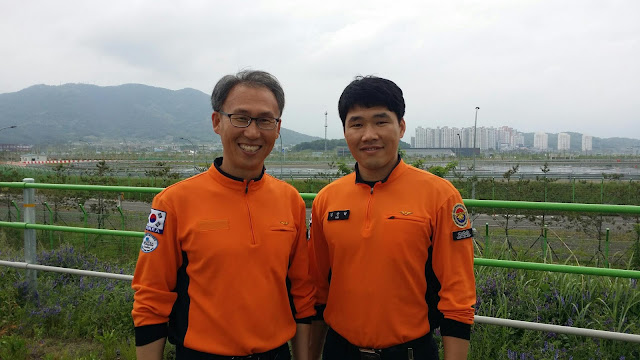 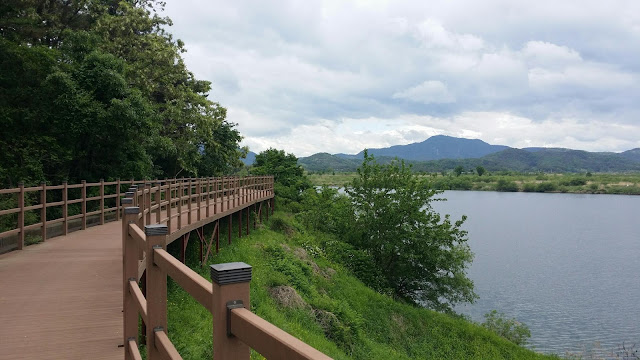 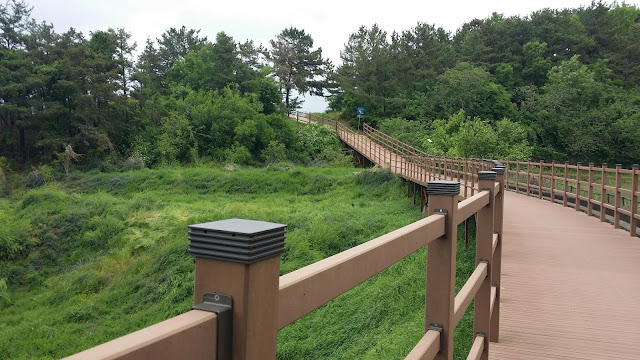 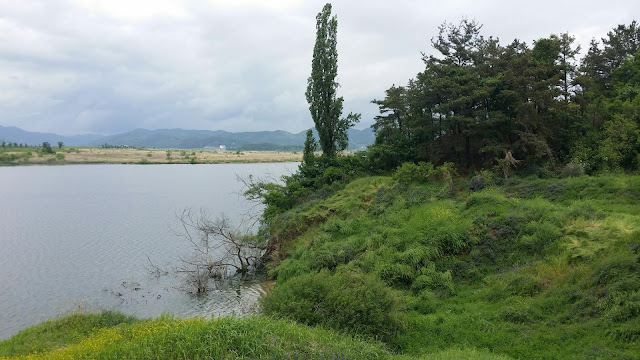 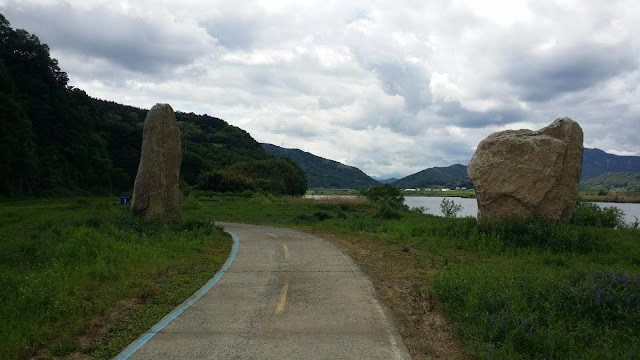 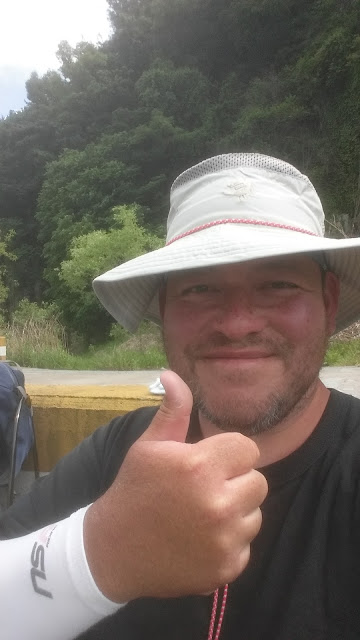 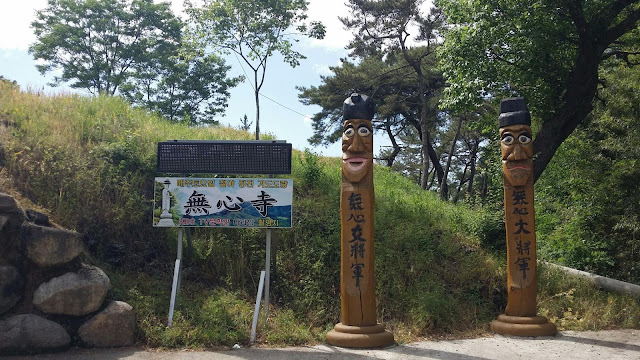 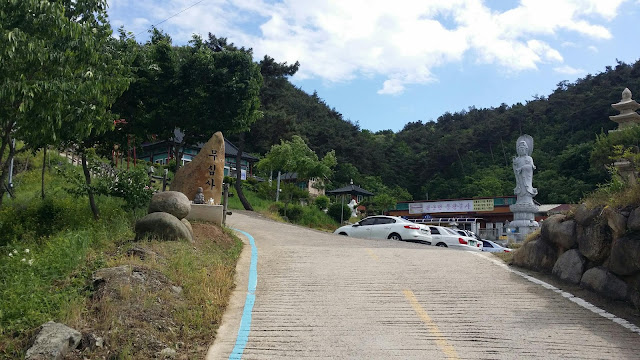 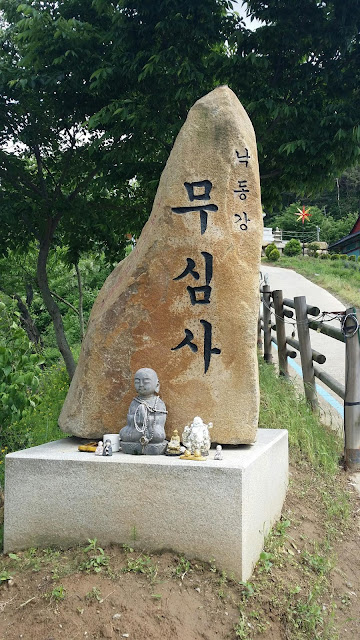 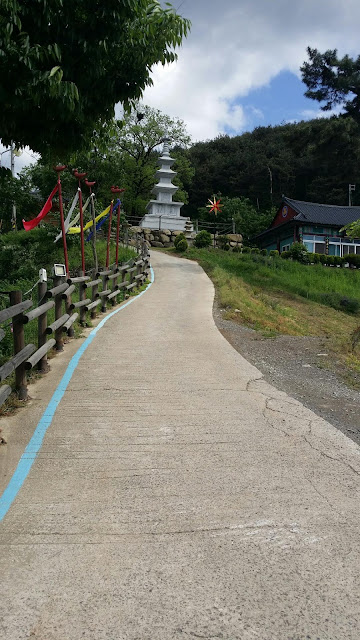 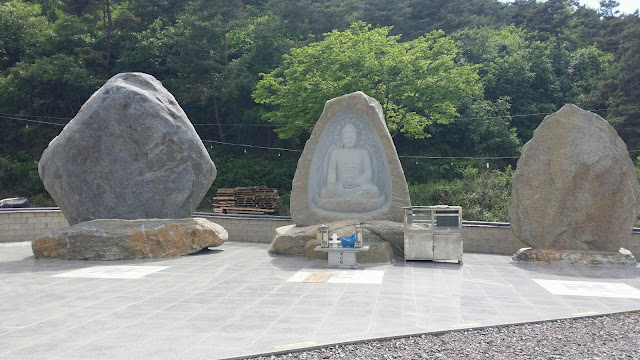 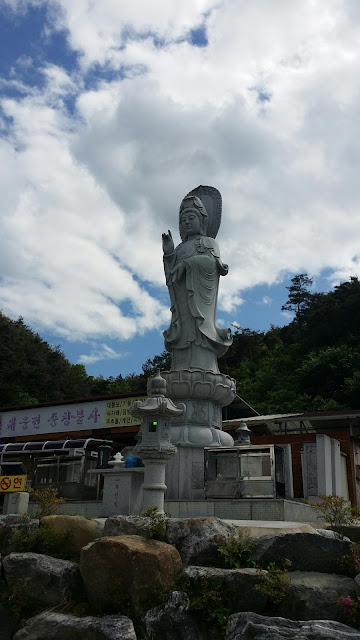 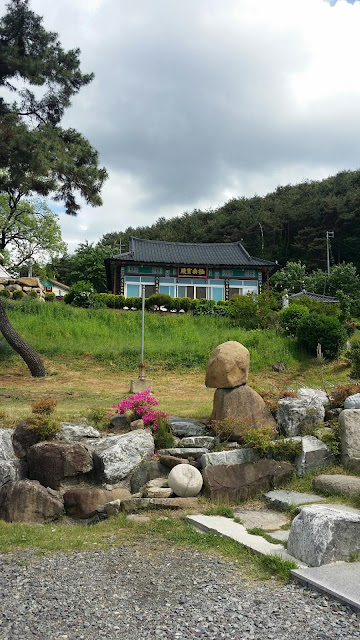 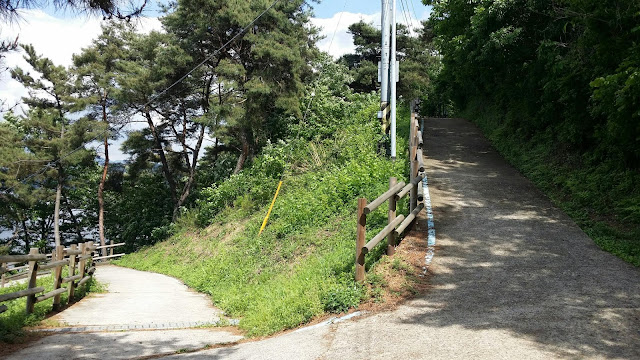 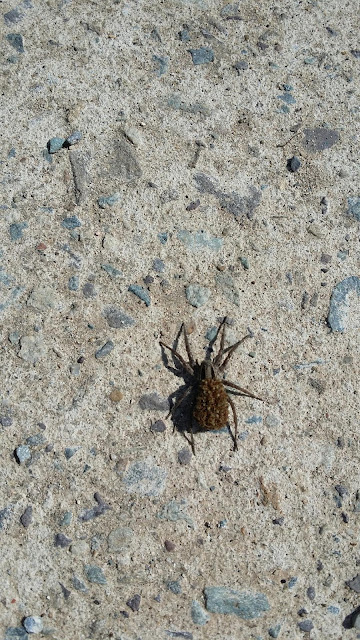 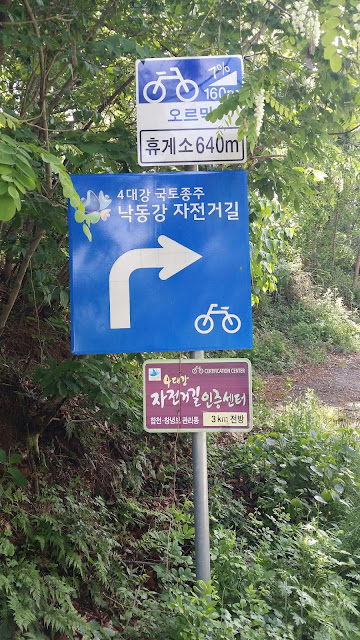 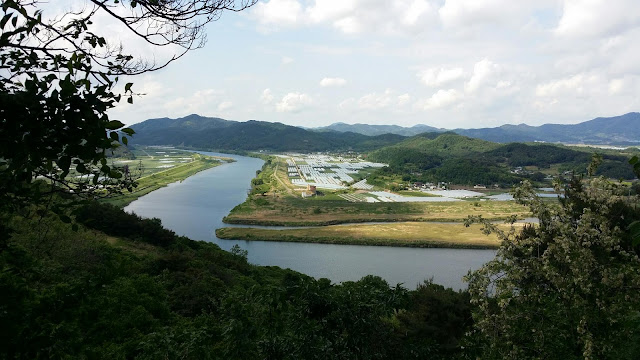 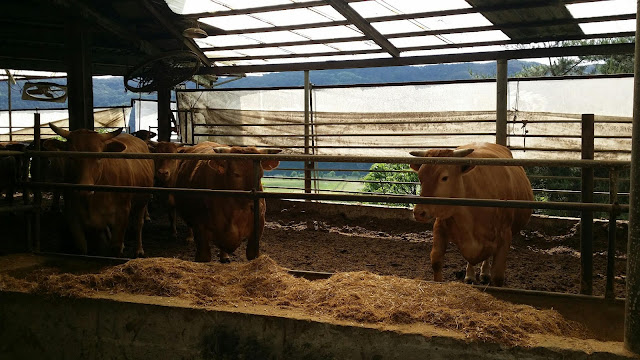 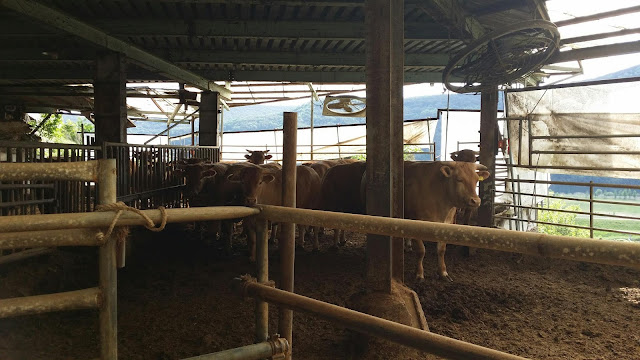 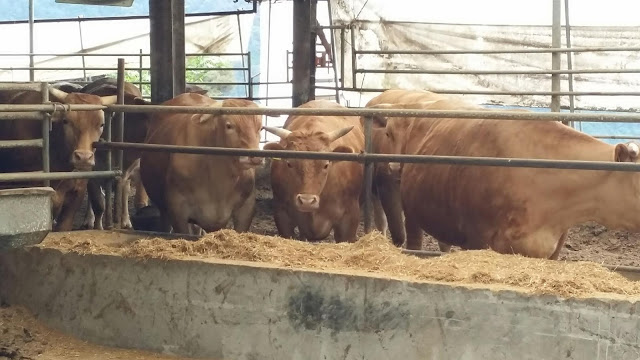 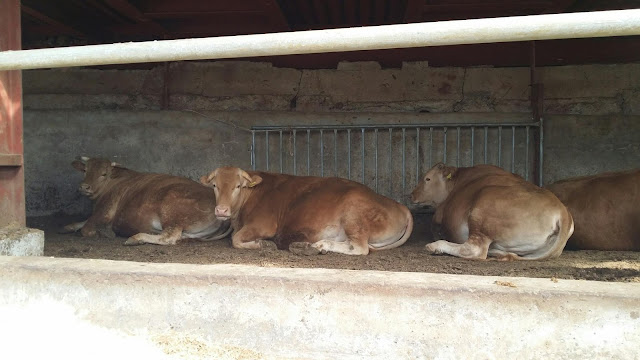 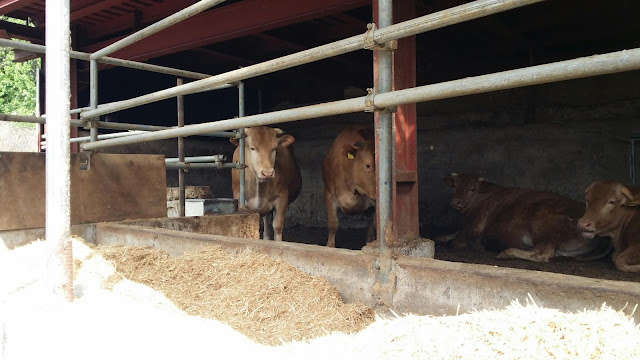 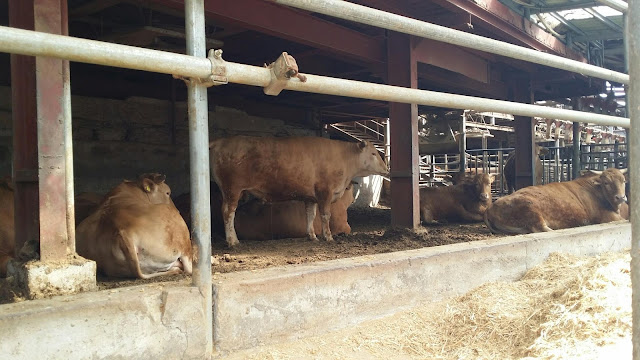