Many readers suggested eating in town, and I've been doing that whenever restaurants have been readily accessible. Today, I finally got the Chinese food I've been craving. For some reason or other, every town I've been in before now has either had no Chinese restaurant or a Chinese restaurant that's been closed. Very frustrating. Today, I finally got my wish and ate Chinese food. It was close, though: there was also a W7,000 meat buffet and a soondae-guk place that I found very tempting. (Soondae-guk is, along with al-tang, a soup I want to learn how to make this year.)

The place had a hole-in-the-wall look about it, but the food was better than almost any Korean-style Chinese food I've had in Seoul. The portions were huge, too, considering the price: in Seoul these days, W15,000 will get you a very stingy portion of tangsuyuk (sweet-and-sour pork). What came to my table today was a veritable mound of food. (The lady who took my order asked, "And you're eating that alone, right?")

Other diners were staring at the portion size, doubtless wondering how I was going to shovel all that mandu and tangsuyuk into my gullet. I didn't care. In fact, I ended up engaging several guys in conversation. Talk shifted from food to my hike, and once again, I was grilled with the Standard Questions. One guy comically tried lifting my backpack, claiming it was heavy. I shamed him by reminding him that, when he did his military service, he probably had a 50-kg pack on his back. My pack was nothing by comparison.

When it came time to leave and pay, I paid gladly, having enjoyed one of the best meals I've had on this walk. 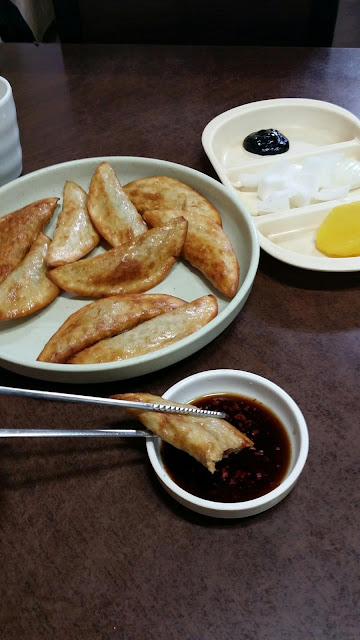 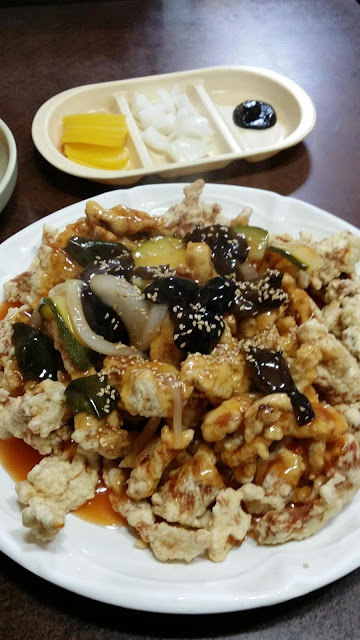