Walk Thoughts #188: dinner and the chef

Tonight's dinner came courtesy of the heavily advertised restaurant behind my motel, which has the strange name of Bo Ah Pae (보아페). I don't know whether that's supposed to slyly evoke the hangeulized word for "buffet" (부페 or 뷔페, bu-pae or bwi-pae, the latter coming from an attempt to simulate the French "u" sound) while punning on bo apae (보앞에), i.e., "in front of the dam." Probably not, mainly because I suspect the noun bo (dam) is a bound particle that can't appear by itself or at the head of a phrase (like the bound particle sa/사 for "temple"; the unbound noun for temple is jeol/절). I could be wrong, though. In fact, the guy running the restaurant told me I was probably wrong about "Chilgok" meaning "Seven Valleys." He found a chil character that had something to do with a tree or with some kind of tree bark, I think.

Anyway, I was the only customer in the restaurant this evening, which is too bad because the place has a good atmosphere and the chef/host is an affable, informative fellow. There was no menu on the wall because the place serves only two things: grilled pork and a special pork called seokswae dwaeji (석쇠돼지). I'm still working on how to translate that. "Stonemetal pig" is evocative but surely incorrect.

The chef and I talked about what I was doing. He told me about a Korean woman who had come into the restaurant. She had been between jobs, and had been doing the same thing I was, walking from Seoul to Busan, but in an inhumanly short amount of time. She had supposedly made it to Chilgok Dam from Seoul in only seven days, which sounded like bullshit to me. I suppose a relentless 23-mile-per-day pace is possible, but a skinny Korean chick would ruin her metabolism at that brutal rate. I doubted the story, and said so.

The meal was quite good. I placed a double order when the chef told me that a single order had only 200 grams of pork. You'll see the photos below. The lettuce in the large metal bowl is supposed to be a European-style salad with a vinegar dressing; everything else is Korean (except the pickles). The pork tasted great to this weary traveler. I ate everything in front of me except the raw garlic, which I have no use for unless I'm cooking with it or making pesto.

I asked the chef if it would be all right to take his picture. Ever bubbly, he said that would be fine. It's a real shame his place isn't getting any business during peak hours on a Saturday; I have a sad feeling the resto won't last. That said, I wish him good fortune, and I'll be in his place tomorrow for a lunch of grilled pork. 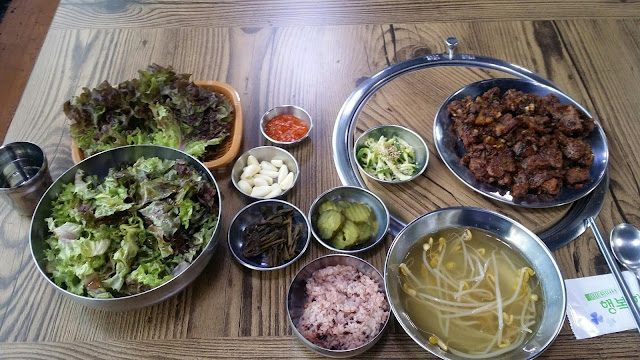 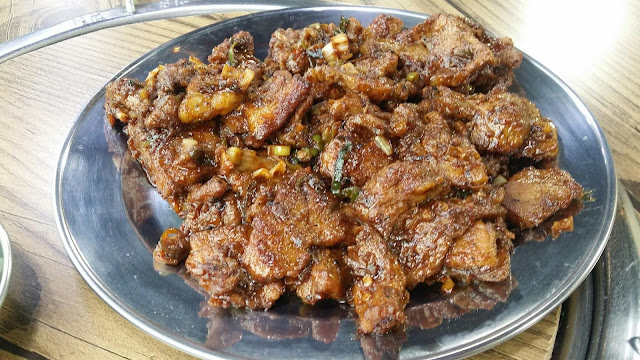 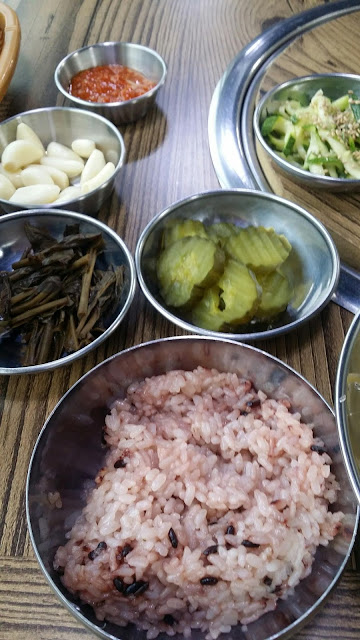 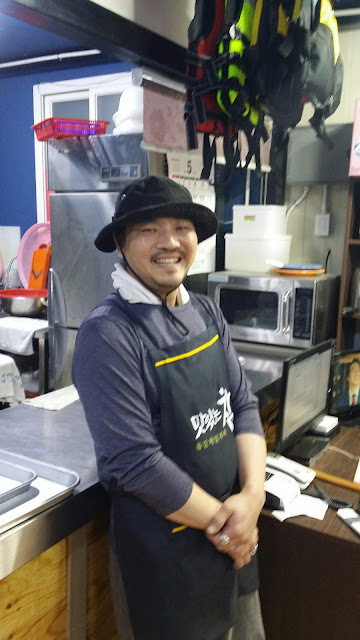