So let's talk specifics: let's talk about where I'll be walking over a period of 24 or 25 days. Today, I'll show you the first day's walk, rendered very approximately on Google Maps. In future posts, I'll be showing several legs at a time.

There's a certification booth at a place called Neungnae Station, which I'm not seeing on Google Maps, but which does come up on Naver and my Maps.me app. The Neungnae area is a bit beyond the reach of my first leg, but that's fine. I'll hit it on Day 2, most likely. Here's a map of Day 1's walk (click, right-click, then "open image in new tab" to enlarge): 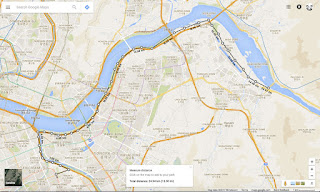 Essentially, this is the route I biked, almost down to the meter. I'll be walking about 15.5 miles out, then camping. At the spot where I turned around on my rented bike, there are fields ("There are fields, Neo... endless fields...") where a tired Kevin can set up camp—hopefully without being bothered by any nosy assholes claiming the field as their own.

Day 2's walk ought to take me past Neungnae Station and the mighty Paldang Dam. More on that part of the trip later.