I messed up. I had assumed JW and his boy would be coming over on Easter Sunday after church, but JW called today, around 1:15PM, to say that he and the boy would be over around 1:30PM. I had misread JW's text message, in which he had suggested both a different date and a different time for our hike-plus-equipment-testing event. My brain apparently registered the change in time—thinking that the change was purely because of Easter and church—but it had failed to register the change in date. I reread the relevant text-message exchange and saw that JW had indeed specified meeting on the 15th instead of the 16th. So today, when JW called to say he was only a few minutes out, I shrugged and told him I'd be ready. I wasn't ready, but I forced myself to prep quickly.

We three guys hiked along my shorter creekside route, i.e., the one that takes me only about 2.5 hours instead of the one that goes on for 5 hours and takes me southwest into Gwacheon City. JW and I did all fourteen staircases, but his son lost courage, complained about the heat, and gave up the stair-climbing after seven staircases. I had to remind myself that he was just a kid; it would have been unfair to ask him to be a good soldier and do the entire route as I usually do it. The boy also became a bit obsessed with my CamelBak-ripoff water bladder, taking frequent drinks and even "showering" himself once or twice before I told him, good-naturedly, to knock it off.

Having hit Staircase 14 and turned around, we walked a bit and settled under a bridge to have an early dinner. I had brought three MREs, but because I had also already eaten an MRE for lunch (it wasn't bad!), I took a pass and let JW and his son choose which meals they wanted. They elected to share a single meal, and I nibbled at the fringes, eating and/or drinking whatever they weren't consuming. We also tried my Grayl filtration device on some creek water. JW refused to drink the filtered water (he later said he had pretended to drink it, just to placate us), but JW's son and I gulped a few swallows. As of this writing, I'm just fine.

When we got back to my apartment, I bought a Coke Zero to do the Coke test on the Grayl; sadly, that ended up failing, but I do wonder whether I had performed the test correctly. (Without a doubt, I had radically cut down the filter's life by pouring Coke into the cup, so it's a good thing I have two spare filters!) We went out to the park beside my building to do the Coke test and to set up my bivy sack, sleeping bag, and foam roll.

The bivy sack initially proved to be a puzzle. It had a single ridge pole, and it wasn't immediately obvious what to do with it. JW eventually figured out the elegant solution, but the bivy, once deployed, still didn't look anything like how it looks in all those outdoor-store catalog pictures: instead, it looked wrinkled and limp, and the ridge pole, despite being correctly inserted, didn't stand up straight. It could be that I'm still doing something wrong; I'll practice a few more times this coming week before I set out on the trail.

Everything else worked fine: the foam roll was pretty straightforward, and the sleeping bag, despite gibes from JW and his boy about how I wasn't going to fit inside it, accommodated me well enough. My brother David joked, over Skype, that I should use my MREs as a pillow, which actually isn't a bad idea.

Speaking of MREs: I know I already talked, above, about eating them, but yes: my MRE boxes did arrive on Friday, and I picked them up from Abel Magwitch this morning. Those boxes proved to be surprisingly heavy, but in retrospect, after everything I had written in my first Walk Thoughts post about how much MREs weigh (about 750 grams per pack—about 20% heavier than the 625-gram average I had listed in that post!), I suppose the MREs' heft shouldn't have been surprising at all.

The MRE that JW and his son ate was called a "beef patty," and it was truly disgusting-looking. It came with a packet of cheese, plus packets of ketchup and mustard, and when the boy squeezed all those gooey elements onto the patty (the chemical-heating packet worked perfectly; the patty came out of its plastic sleeve piping hot), the resulting vision was horrifying. I joked that it was modern art, which got JW laughing.

Back to equipment-testing. I let JW's son get inside the bivy sack and test out the sleeping bag, then it was my turn. I offered Survival Tabs to JW and his son; the boy refused the offered horse tablet, but JW ate one out of curiosity. I don't think he liked it, and that's primarily because Survival Tabs taste shitty. As I said before, they're only meant to keep you alive.

There were a few things we didn't test. We didn't test out my solid-fuel camp stove; I'm curious to see how efficient it is, and how smoky it gets (the box says it's nearly smokeless, whatever that means). I suppose I'll test it out this coming week. I also didn't get to feed the guys any Soylent or, for that matter, any Mountain House meals.

All in all, though, today was educational. I'm especially thankful to JW for solving the riddle of the bivy sack's ridge pole; now, I just need to see whether anything can be done to make the bivy sack look less like a collapsed lung once it's been deployed. If nothing else, I've learned that repacking my equipment is going to take more time than anticipated unless/until I practice with it more. Right now, my bivy sack barely fits into its bag, and there isn't enough room for the ridge pole, which I'm storing elsewhere in the backpack. Same goes for my ground sheet, which came with tent stakes that are currently being stored elsewhere in the backpack. The only thing I repacked properly is my new sleeping bag—mainly because I remembered the roll-and-fold technique I had used with the sleeping bag I had in 2008.

I suppose that, if I can wake up at 5AM and be walking by 6AM, I'll be all right. It's going to take some practice, though, to make sure I can strike camp within an hour of waking up. Meanwhile, here are some pictures of MREs, today's creekside hike, and our equipment-testing session. The MRE pics were taken by me; the hiking pics were taken by JW. The final pic of JW's son in my bivy was taken by yours truly. 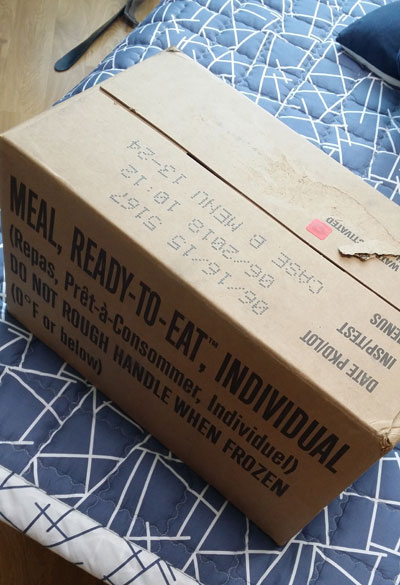 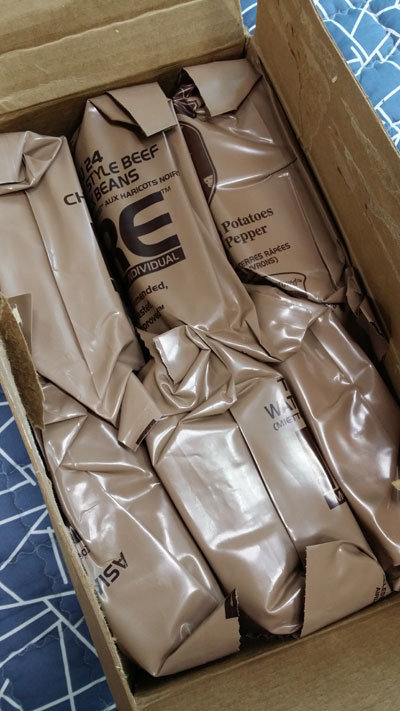 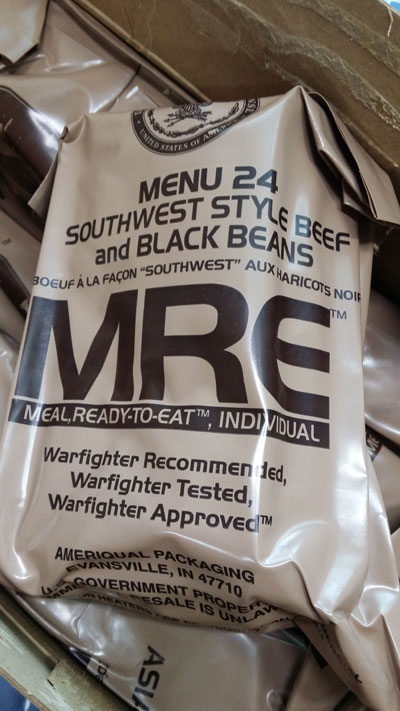 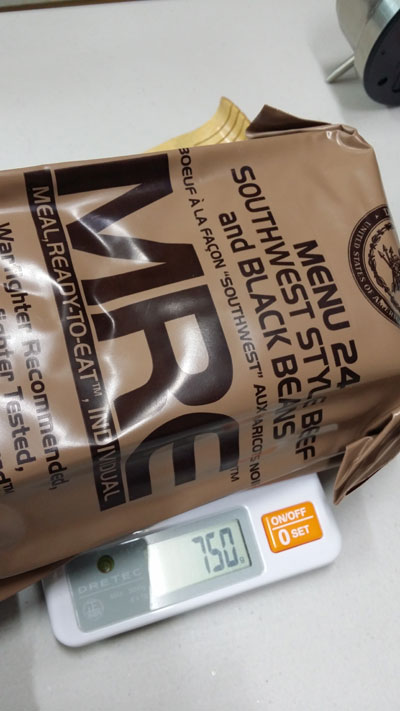 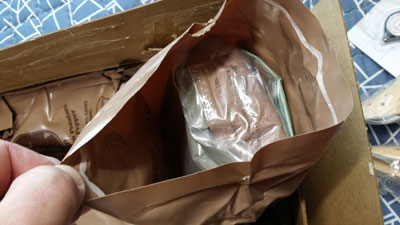 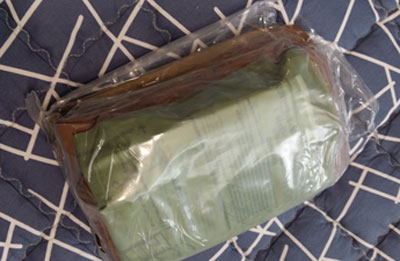 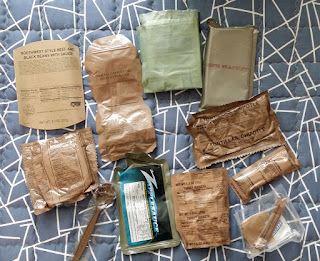 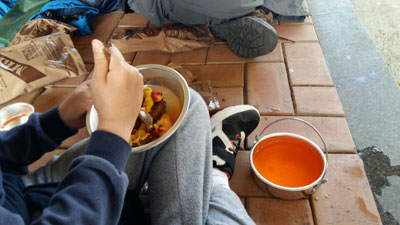 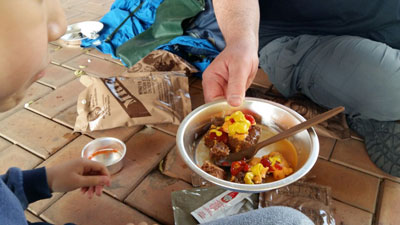 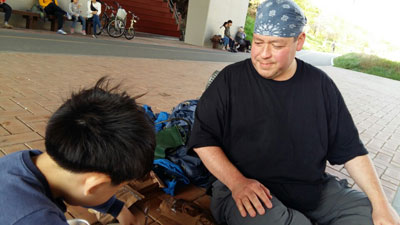 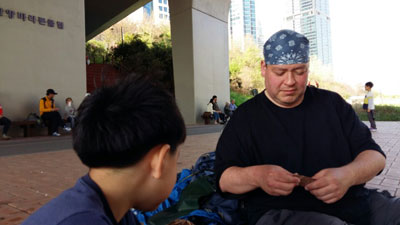 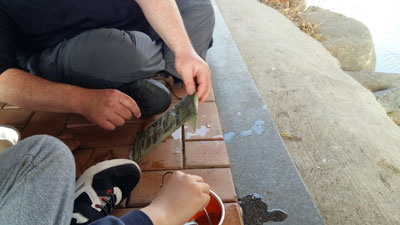 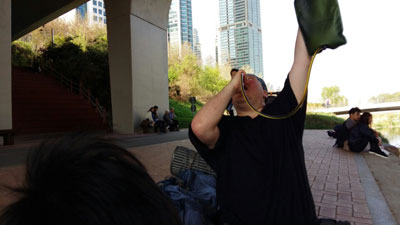 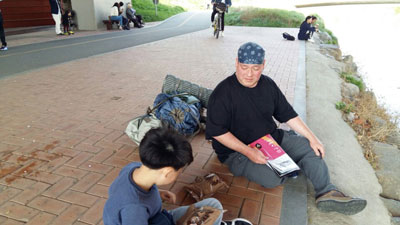 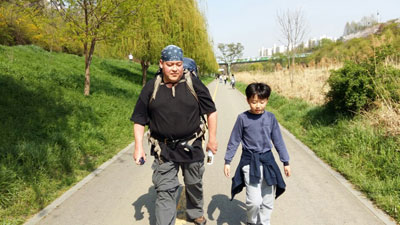 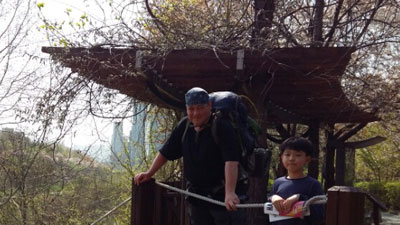 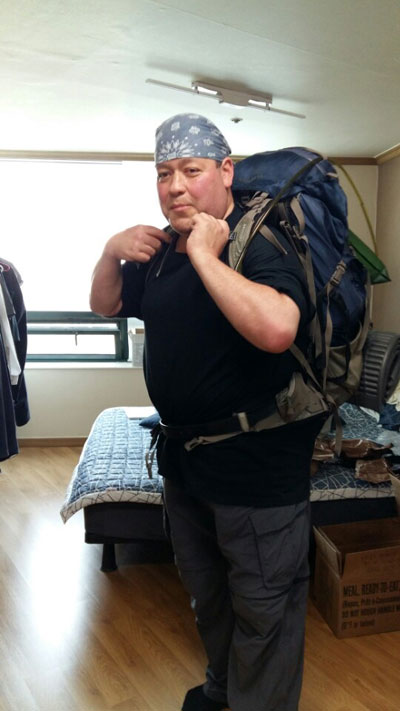 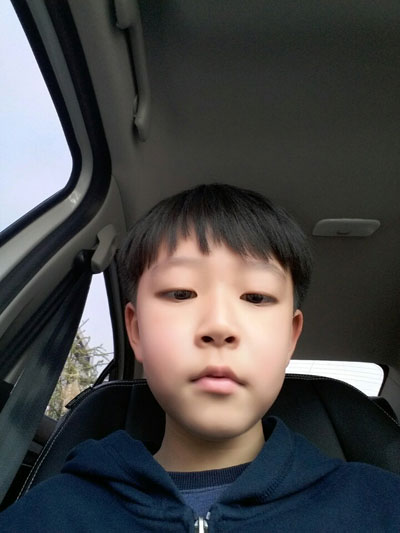 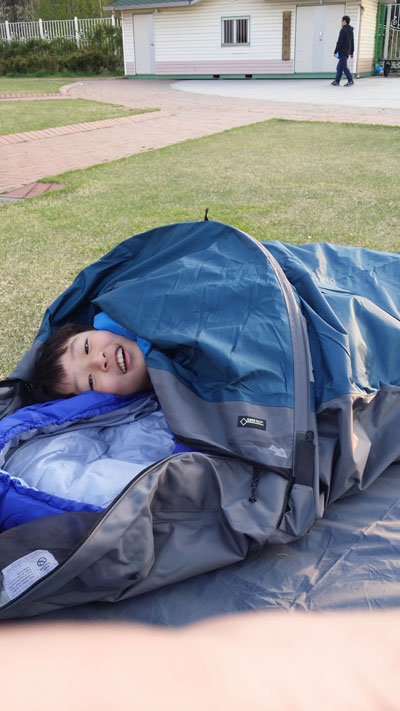