I'm not even two hours into today's walk: fourth day on the road, third day walking. The blister isn't painful thus far, which is good. I'm south of Yangpyeong, sitting on a bench in a "sports park," surrounded by cow sculptures. Signs in the area have been proudly advertising the region's pure water and its hanu, i.e., its Korean beef.

I'd characterize today's trail as "Saejae Lite": lots of little hills, and long stretches with no bike path, thus forcing me to walk in the road. The sports park marks the return of the bike path, but for how long? No idea.

In other news: I'm already cinching my hip belt down to the last hole. Can't say that I've lost much (or any) weight, but it's bad that I've already reached a point where I need to punch new holes in my belt. All I have to do that with are my pocket knife and my multitool. I'm afraid that, in punching the holes myself, I may end up creating a hole that eventually rips wide and ruins the belt. We'll see how the hole-punching goes, I guess.

There was a stretch of hilly road on which I saw houses that reminded me of American or European suburbia. The architecture really took me out of Korea, so I had to take some pictures, which you'll see below. Unreal. One pair of houses looked hilarious together: the left one was painted like a primary-school recreational facility, and the right one looked like a Bauhaus cube straight out of the mind of an angry German architect. 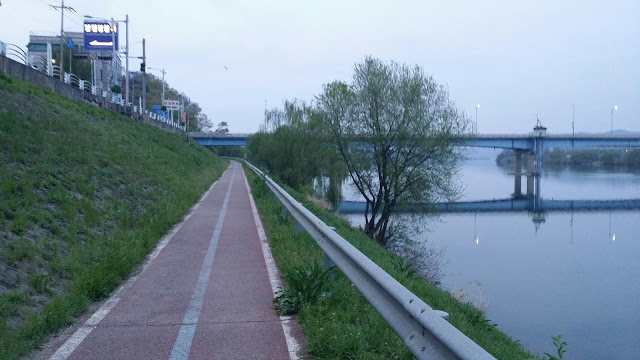 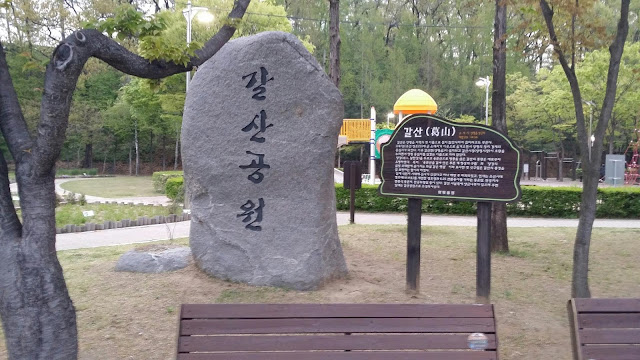 First strangely American-looking house, all in brick as we do it in the States (at least on the east coast): 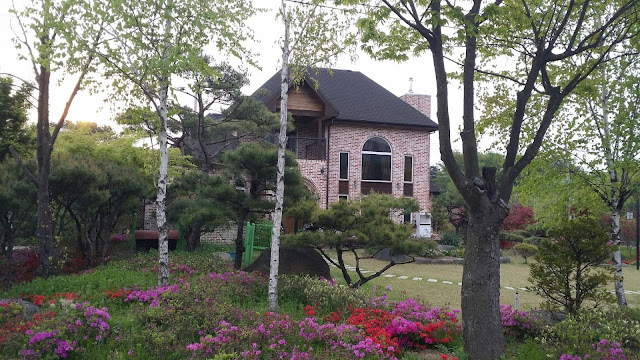 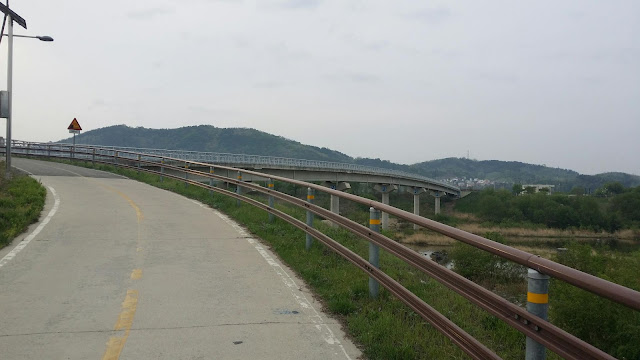 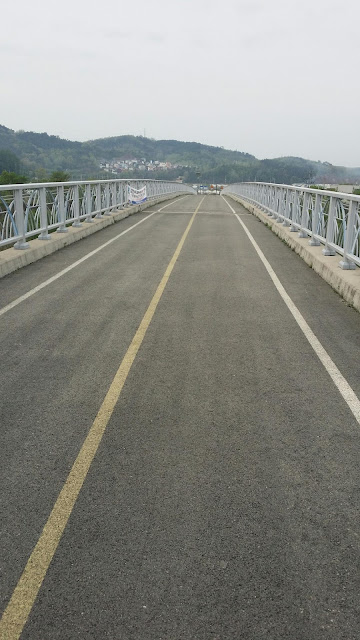 In the distance, another not-very-Korean-looking domicile: 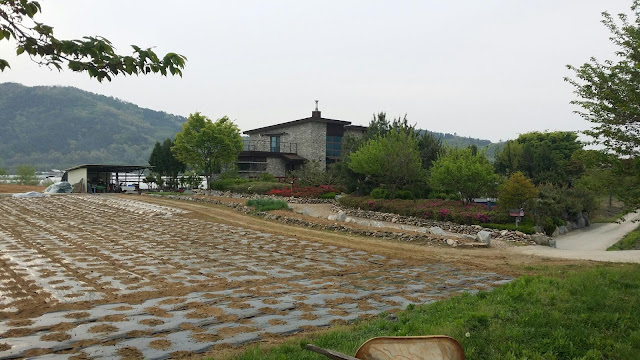 I seriously began to get curious about what it would take to own property out here.

The most ridiculous landscaping for what is essentially an outhouse: 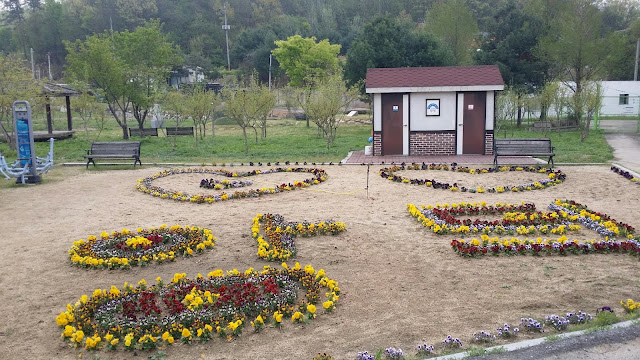 Take a shit, admire the flowers, then do some lifting: 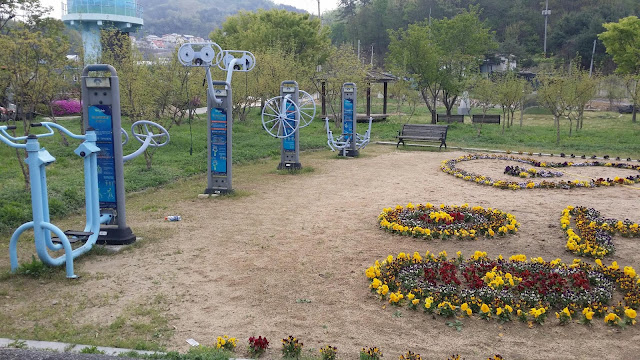 First major hill of the day, and the pedestrian lane disappears: 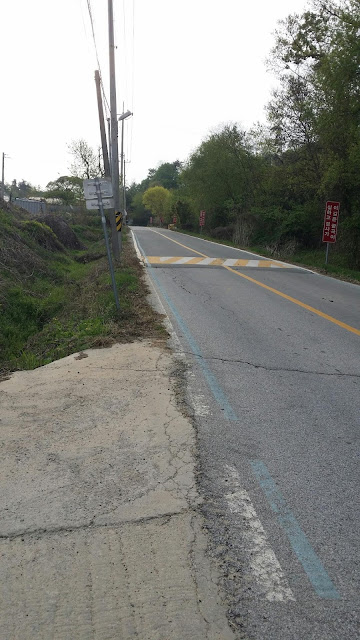 If this doesn't look absolutely American, I don't know what would: 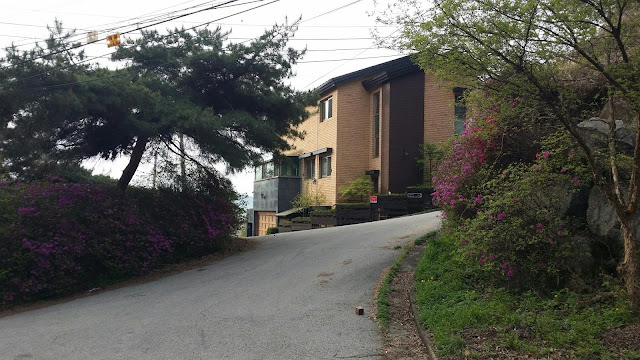 Normally, when I think of Korea, I think that there's the city, and there's the country, with no suburbs to connect the two. After seeing all these houses, though, I'm going to have to rethink that position. The house below is a case in point as to why: 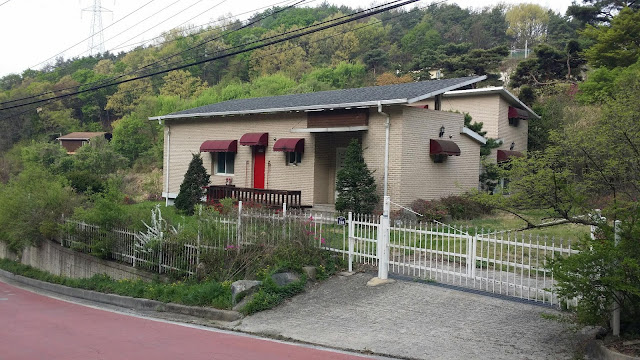 This house, set a low, could pass for any number of similar houses in Virginia: 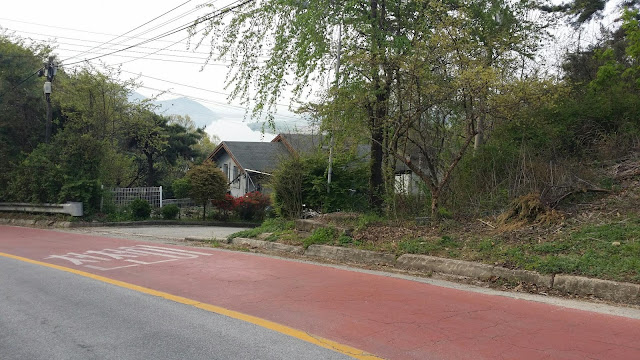 A series of signs saying, very roughly, "We're all on the road together, so let's drive slowly and safely, etc., etc.": 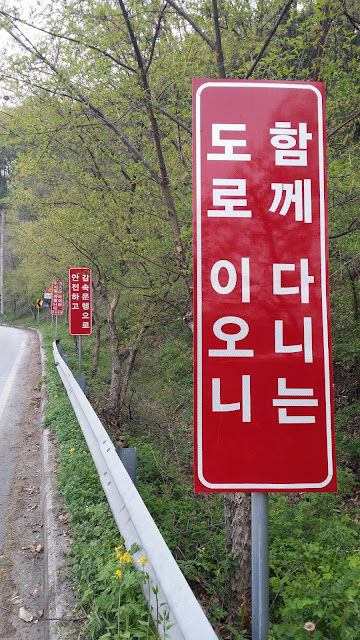 The hilarious duo—clown house and Bauhaus: 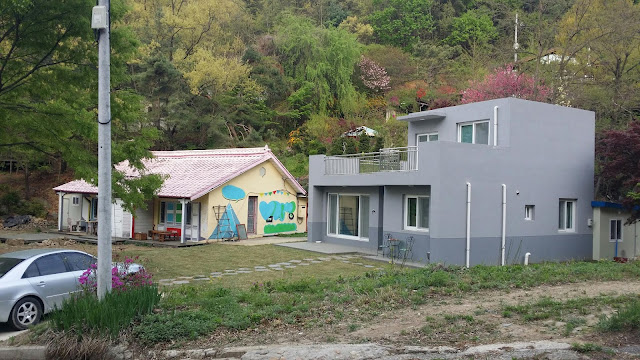 Looking uphill, I saw little to remind me that I was still in Korea: 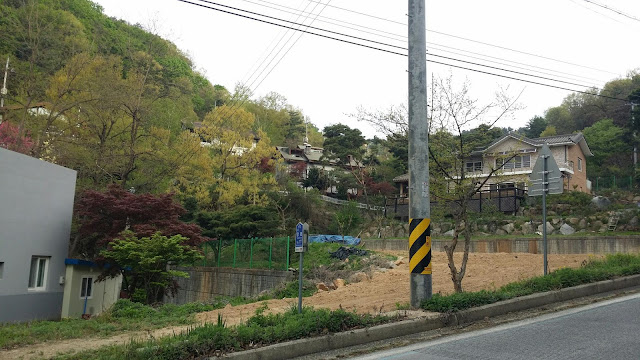 When I saw the building below, I thought: this fucking house has a TURRET! 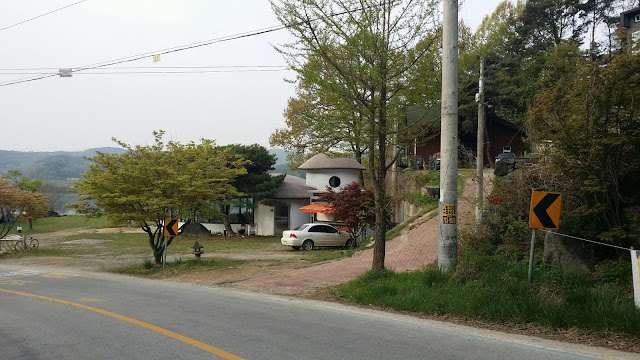 Then I got closer and realized this was a restaurant, not a house. Not that that excuses the turret, which is pretty egregious: 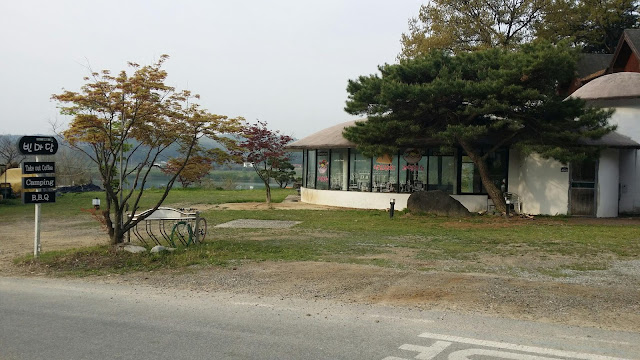 Things started to widen out and get quieter. Off to my right was a creek in a ravine (not visible); and hanging from the lampposts were signs boasting of the local beef: 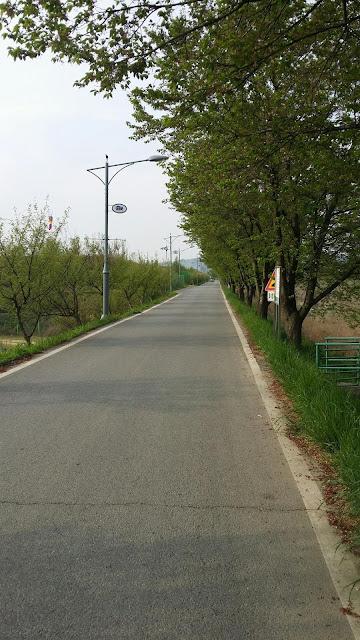 I came upon a "sports park" as I swung back toward the river: 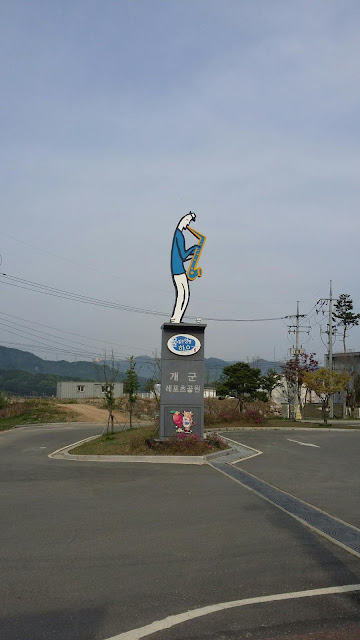 ...and I saw that Ipo Dam (or weir, technically, since it's a small dam) was near: 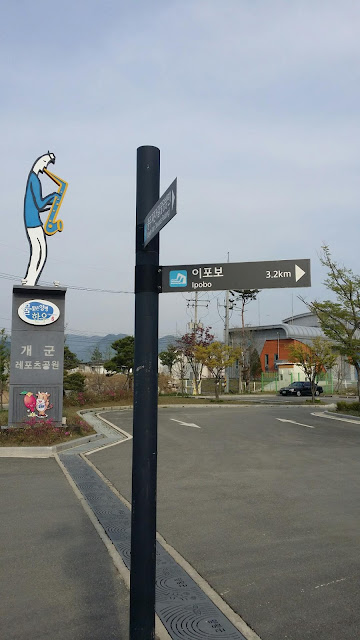 On the right track: 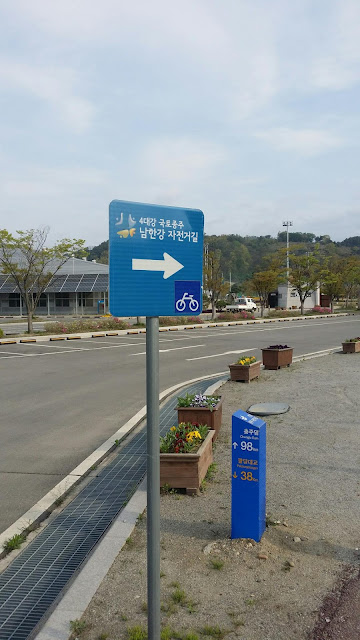 My phone's Naver Map app was telling me that leaving the park meant looping backward on the bike trail, then eventually heading south again. Fuck that, I thought, and simply took a short cut across the park to the southward-tending bike trail.

But I had to sit down first, and that meant passing a lot of cow sculptures: 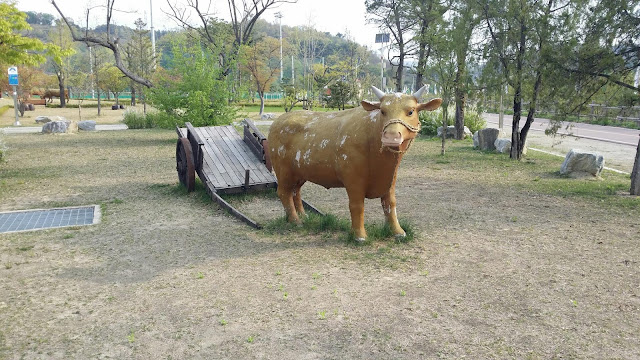 Including the bull that guards the restroom: 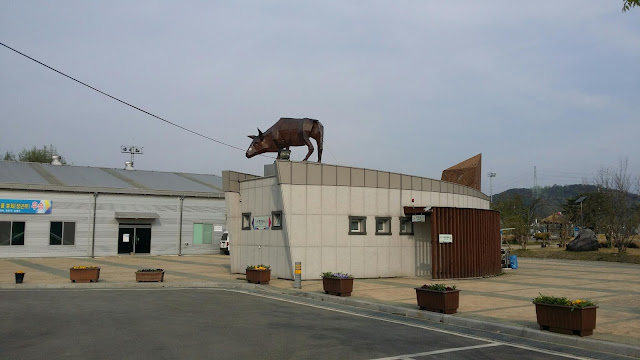 ...and the kine that ring the shwim-teo (platform for resting): 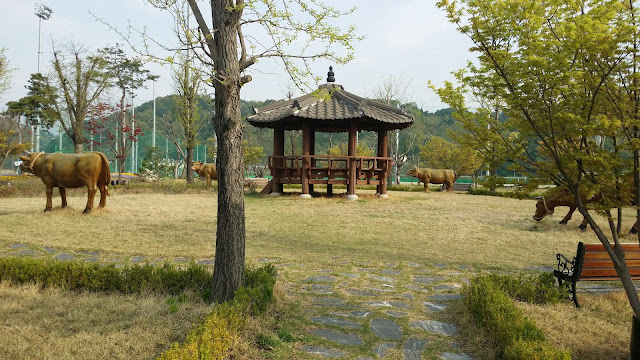