While walking away from the Ipo Dam/Weir, I encountered some of my favorite Korean folk art: the jangseung! Traditionally, these trailhead guardians appear in pairs—one male, one female. The male pole normally reads Cheon-ha Dae Jang-gun, which I suppose is "The Great General Under Heaven." The female pole normally reads Ji-ha Yeo-janggun, i.e., "The Female General Beneath the Earth." I don't know the significance of these titles (and I'm sure Charles will swoop in with a better translation plus an explanation), but it's something I'd like to look into. One day, I'd like to craft my own pair of loony-eyed jangseung.

What's strange about these jangseung is seeing them all—and they're mostly male—jumbled together en masse. Even stranger is seeing them with Korean writing on them instead of Chinese. Curiouser and curiouser. 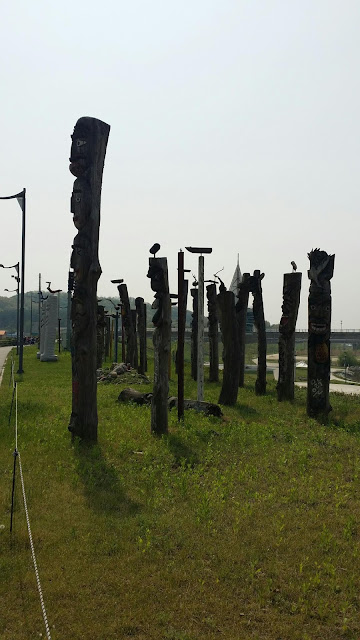 I'm hesitant to use the term "totem pole" to describe jangseung. The term "totem" has both a technical meaning and a cultural significance, neither of which maps well onto Korean culture. Totems are normally symbolic representations of clans and certain tightly knit groups. More than mere symbols in the modern sense of "a sign that points beyond itself," a totem is a symbol in the older, deeper sense that it participates in the reality it represents (this is close to the Catholic understanding of "symbol" as a mediator of divine reality, the shape and form of the symbol determining the mode of mediation). While Korean art can reflect something akin to clan or tribal affiliation, I don't think that's what jangseung are at all. I have no deep knowledge of these fascinating and often comical figures, but my impression is that, more than anything else, they are the direct personal expression of their creator's élan. This makes sense to me because there are simply so many different jangseung out there. You can find cookie-cutter jangseung in the art/tourist district of Insa-dong, but outside of that context, when you meet jangseung in the wild, no pair is the same as any other. I could spend my whole life studying these bizarre and compelling figures. But my point is: I really don't think they're totem poles, so I try not to use that term to describe them (although I've been guilty of doing so in the past, but—in my defense—with scare quotes).

That said, look at the jangseung below: 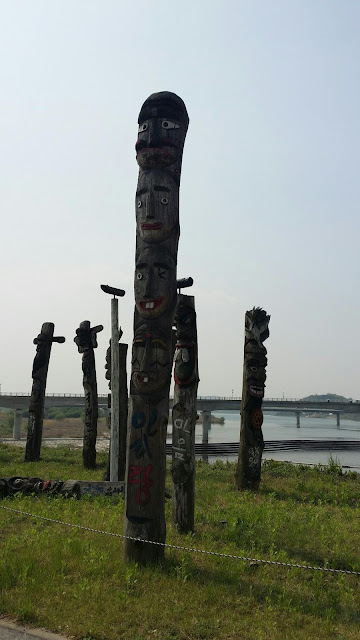 I immediately liked this fellow: 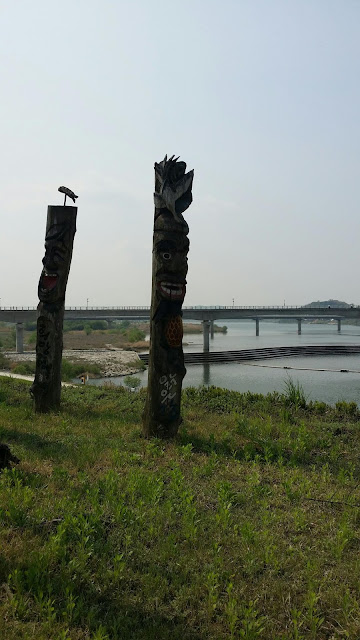 And it seemed apropos for this one to be lying drunkenly in the grass: 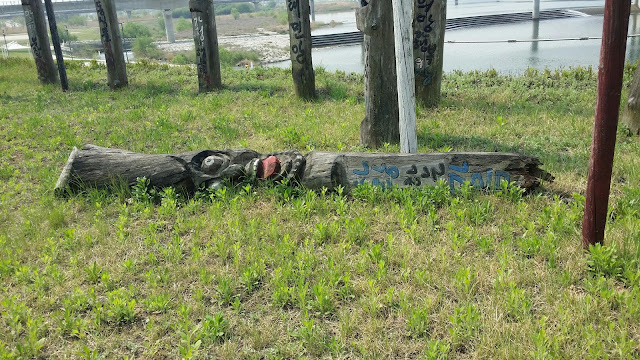 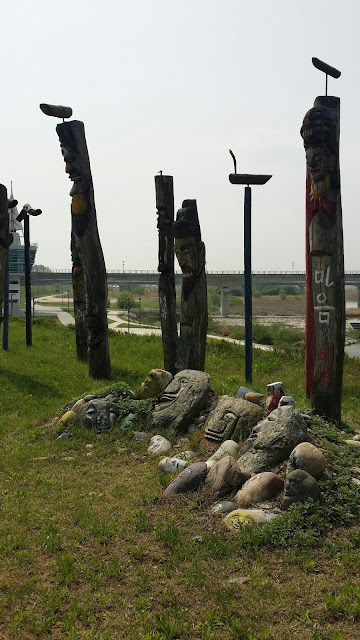 A feminine pole here... then there's the curious case of the pole on the right, which doesn't look to be a true jangseung at all: those faces are the classic mask faces associated with Korean mask dancing (tal-chum): 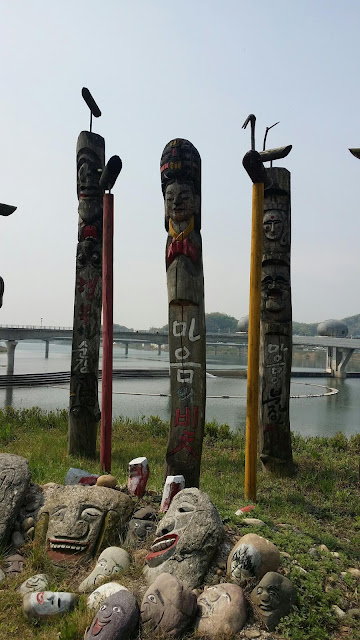 The crazier they are, the more I love them. I'd love to buy this guy, but he'd need an equally insane feminine counterpart: 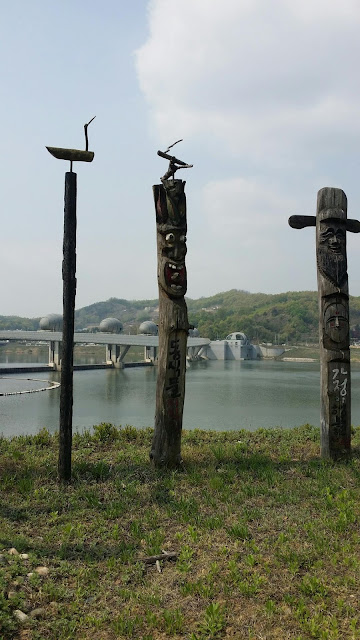 The rocks, at least, seem happy: 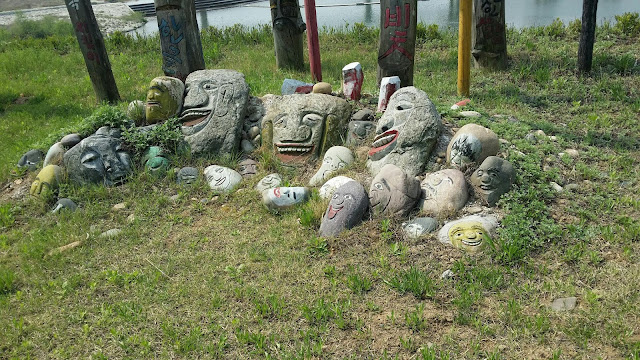 And I have never, ever seen a cyclopean jangseung. Ever. 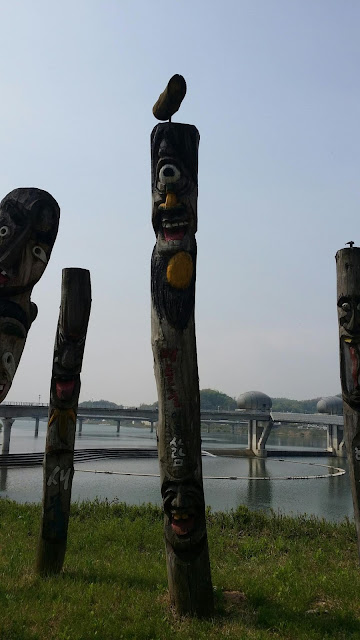 Am still trying to figure out what this is: 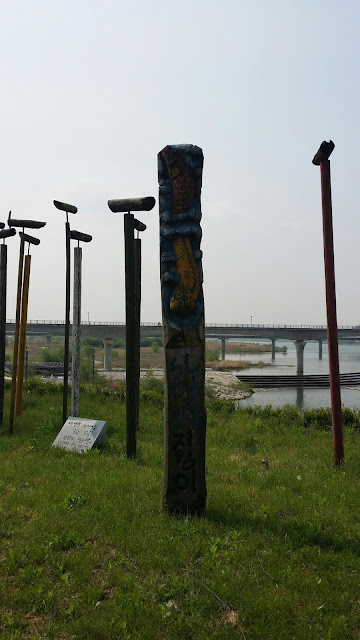 Even though these are made of stone, I kind of dig their interplanetary look: 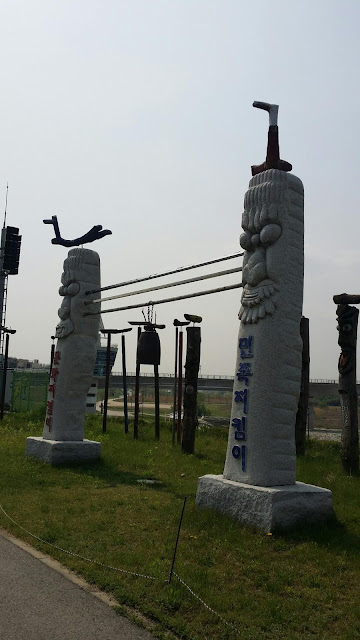 The more tongue, the better: 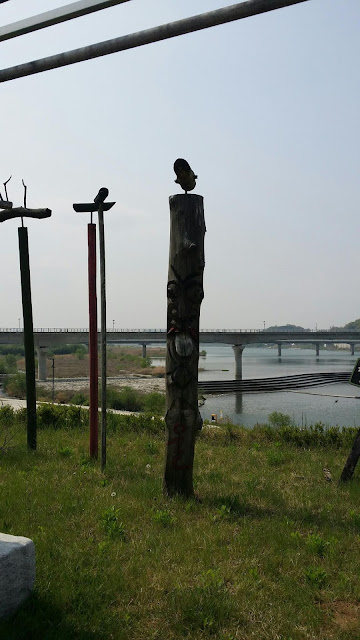