Walk Thoughts #20: a theory (and other things) 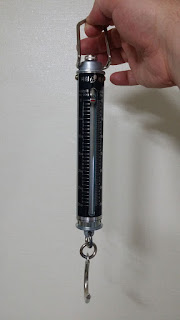 I went to Jongno Saturday afternoon and barely caught that lazy old motherfucker who runs the scale store. He and a thirty-something man were packing items into the store and preparing to shut the place down when I caught them; this was around 3:20PM—a closing time that's unheard of among Jongno-working Koreans on a Saturday. I went through the same process with the old guy that I'd gone through at other stores: I showed him a pic of an electronic hanging scale, explained what it did, then asked him whether he had a similar type of scale once he told me he didn't have an electronic one.

"Analog," he replied, and I said analog would be fine as long as it was accurate. He asked me about the baggage I intended to weigh: "This scale only goes up to 30 kilograms, so it's good for when you travel by plane." I said my backpack would probably come in at under 15 kilograms (more on that in a bit), and he nodded. The old man told the young man to go in and find the scale for me; that was when I asked whether the young man was his son.

"Nephew," he answered. The nephew came out with the scale, which was heavy and looked like a piston. "You can use this screw at the top to adjust the scale if it's off," the old man told me. The rig ended up costing W25,000, but on Amazon, the electronic ones range from $10 to $60, so I suppose $22 was fair. I asked the old man what his store hours were.

"We close early on Saturdays," he said unhelpfully. I could see that.

"What about weekdays?" I asked.

"From 9AM to 6:30PM," he said. Ouch. He closed early even on weekdays. Not that I'd ever see this gentleman again, but I was curious as to why I'd kept on missing him. In fact, frustrated, I told him that I'd already tried visiting his place two or three times before, but the door had always been closed. He just smiled at that. Lazy bastard.

So I now have a hanging scale, and I've already used it to determine what I've long wanted to know: will my backpack weigh in (without the water) at under 35 pounds? The answer, happily, is yes. Out of curiosity, I first weighed my backpack while it was empty: 2.5 kg (5.5 lbs.). Next, I stuffed in all the supplies I currently have, using extra sacks of Soylent to simulate the MREs that will be in the pack. End result: 13.5 kg (29.8 lbs.), which is perfect for my purposes. Water will add another 3 or so kilograms (about 7 pounds), but that's negligible, and I'll be sipping on my water all day, taking it in and sweating it out. I'll also be dropping weight from the backpack every time I eat an MRE or a Mountain House dinner or a scoop or two of Soylent (Survival Tabs weigh almost nothing, so I'm not counting them), so the encumbrance situation will only improve as I make my way south.

A Theory About Those Blisters

Two weeks ago, I did my almost-five-hour walk with Brian Dean, and I ended up raw in the nethers and sporting a large blister on my right foot. I had a blister on my left foot as well, but that one was much smaller—not even visible on camera. How did this happen? I've done plenty of five-hour walks in the past without suffering any ill effects. What gives?

My theory is that walking speed was a major factor. This is going to sound as though I'm blaming Brian for my pain, so let me make perfectly clear from the outset that Brian is utterly blameless. Here's how things went down, at least from my perspective: Brian has never made any secret about his athletic lifestyle. He used to be a competitive swimmer, and during our walk, he told me about some long-distance bike rides that he's done. He's also an avid mountain hiker. The overall picture is of a guy who'd give Koreans a run for their money—and probably beat most of them—were he to hike with them up a mountain like, say, Bukhan-san. In other words, Brian moves fast.

During our walk, Brian reined in his pace, as it became immediately obvious that, compared to him, I'm a slowpoke. As I've said before, I walk at a human-standard 3 miles per hour (about 4.8 kph). Many Koreans blow by me on level ground, going at around 4 or 5 miles per hour, which is, I suspect, Brian's natural pace. Despite slowing down for me, Brian was still going faster than my pokey 3 mph, so I did what I could to stay slightly behind him for most of the walk. Walking just a little bit faster than normal—even if this meant going only 3.5 mph—meant lengthening my stride and increasing my step frequency, which in turn meant hitting the ground with slightly different parts of my feet. And that, I think, is how I ended up with blisters: I was walking in a way that was markedly different from how I normally walk alone.

Again, this all sounds as if I'm blaming Brian, but I'm not: at any point during the walk, I could have spoken up and asked him to slow down even further. It would have been a miserable crawl for him, but he's a good gent, and I don't doubt he'd have slowed down had I asked. So the power to control my own pace was still in my hands, which means my blisters were my own fault. As I now embark on walking with my backpack on (I start this Monday morning at 5AM), I'll need to see what having 30 pounds on my back can do to my feet, knees, and hip joints. 30 pounds is half the weight of my pack in 2008; it's funny to think about all the unnecessary crap I'd been carrying back then. I'll get used to having 30 pounds on my back a lot more quickly than I got used to lugging 60 pounds. Even so, 30 pounds is not nothing, so I need to get my body used to carrying that weight before I set out on my journey.

As for gear, there's very little left for me to obtain. I understand that my map pen has arrived, and that's not going with me on the hike. I've got MREs coming soon, and I'll be stuffing some of those into my pack instead of the Soylent bags that are currently in there, serving to simulate MREs. One last thing for me to shop for will be those damn reflector strips or triangles or whatever. I might get those today. If not, I can buy them during the week.

Given the shift in my schedule, with the walk now beginning on April 22 (or possibly the night of April 21), I have no choice but to truncate my exercise program. I've already cut out the crunches in favor of concentrating on planking (30 seconds, front and lateral), and I'll be walking my long, 5-hour walk in the morning now, three times a week. Including the stairs in my walk will be good training for when I finally hit the mountains—although, as I noted earlier, there may be steep angles in my way much earlier along the path than originally expected. I plan to stop all exercising three days before I actually begin: this will give my body a chance to rest and rebuild before, as Deadpool might say, we engage in Maximum Effort.*

In the next Walk Thoughts, I'll be getting specific about each leg of my trip. This is something I've been wanting to talk about for a while. I'll lay out the legs, mapping them them onto my calendar to create a schedule. Each day will have a certain mileage, and I'll total the days and mileage to give you a clearer idea of how the walk is going to look overall.


*Jigoro Kano, founder of modern judo, had the motto Maximum efficiency through minimum effort. Come on, Deadpool—get with it.