With sincere thanks to Abel Magwitch, my benefactor-on-base, for collecting my ordered items, here is the first round of hiking/camping gear that I got from Amazon and REI. Click on the pic to enlarge; right-click and "view image in new tab" to see at full size. 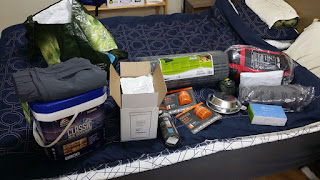 Let's walk through the items you're looking at. Ignore the Costco bag in the back.

Starting from the left:

Dark-grey convertible hiking pants (you can zipper off the legs to make shorts, and the pants' material doesn't darken when wet—one reason why I've long loved this particular brand of hiking pants) sit atop a bucket of scrumptious Mountain House freeze-dried meals. I'll be taking only a few of those meals with me; as you recall, I'll be eating actual, substantive, rib-sticking meals only every other day, and I'll be taking along a combination of MREs, Soylent, Survival Tabs, and Mountain House freeze-dried meals.

The large, white box is full of Soylent, and those powder packs are heavy. Each pack weighs nearly a pound (15 ounces, or 425 grams). I don't see myself taking more than one of those bags along with me. Taking two would be insane, especially since MREs are going to be both heavy and bulky. In terms of prandial enjoyment, I rank Survival Tabs lowest (they taste like congealed powdered milk because they're mostly milk solids; I tried some already). Next up the flavor totem pole is Soylent, followed by MREs, which at least have the virtue of being recognizable food. At the top are the Mountain House meals, which are lightweight and, when mealtime comes around, super-easy to prepare. Survival Tabs—I'll take four tablets to replace a single meal—will be what I eat on non-meal days so that I don't simply starve. I'll be taking seven or eight Mountain House meals plus two or three MREs, plus a bag of Soylent and two bags of Survival Tabs. I definitely won't starve.

Next up, we've got my foam roll in the back: that'll be my camp mattress, insulating me from the cold ground, which is what spongy stuff is good for. In front of the foam roll, you see the long, cylindrical Grayl purification system, which I'm eager to try out over at the Yangjae creek in a few days. The large orange cartridges are the filtration system itself: one for the Grayl cup, one as a spare, which I probably won't need to take along with me since a single filter is supposed to last for several hundred French-pressings.* To the right of the orange Grayl filters, you see my super-simple Coleman mess kit, 75% of which I won't even really need: I bought the kit mainly for the covered mini-pot, which holds nearly a pint of water—water that I'll be boiling for my Mountain House meals. That tiny little thing tucked into the corner behind the mess kit is my backpack's rain shroud—nice and compact. My pack is fairly rain resistant, but the shroud offers more protection for when I'm camping and it's raining all night, or for those times when it's just non-stop rain all day long.

The red-and-black bundle is a compression harness holding my el-cheapo sleeping bag. I might not even need a sleeping bag if the weather in May is going to be largely warm and pleasant. The much-smaller gray bundle in front of the sleeping bag is, incredibly, my bivy bag, i.e., my shelter. Pretty tiny, ain't it. It weighs a bit under two pounds (863 grams, to be precise—almost exactly 1.9 pounds), and I can't wait to unfurl it and test it out in the park next door to my building (assuming the crotchety ajeossis who might or might not be supervising the park say it's OK to set up camp for a few minutes). The grayish packet between the sleeping bag and the shelter contains my Survival Tabs. Lastly, the bright-blue box is a box of alcohol wipes, which I'll probably repack into a Ziploc bag for the trail.

Now I need to tally up which of my ordered items have arrived and which haven't. I also need to go out and buy (1) a first-aid kit (which Costco sells), (2) a hanging scale (which I'm hoping that scale shop in Jongno will sell), and (3) cell-phone batteries plus a portable charger (which I'll buy in Yongsan's Jeonja Land, the huge electronic-products complex).

At this point, the heaviest thing in my backpack is looking to be the food. I'm going to have to figure out how I'll be packing that.

And that's all for now. More walk-related thoughts to come.


*There's also the matter of actually, physically obtaining water. I'll be walking close to rivers pretty much the whole time I'm out on the trail, except perhaps for the Saejae section. That said, there's no reason to assume that I'll be able simply to walk up to the riverbank and dip my Grayl into the flowing water. The bank may be much higher than the water; it may be lined with treacherously uneven rocks; there could be other problems that make accessing the water a less-than-straightforward task. I'm thinking the simplest solution to this problem would be something like a gallon jug with the top cut off so that the jug is almost a scoop, with a long cord tied to the jug's handle so that the jug can be thrown or lowered into hard-to-reach water. Dip the jug in, pull a few liters of water out, then run it through the Grayl. It does occur to me that the Saejae part of the trail will require a bit more planning than the other parts, since it's the part most likely to run up and over the Baekdu Daegan range, taking me away from water sources like rivers. There might be creeks or rills along the way uphill, but it's better to trust in Murphy's Law and assume there won't be any convenient succor from Mother Nature.