Things learned:
1. This was a good shakedown cruise during which I learned some of the ins and outs of my CamelBak-knockoff water bladder (a prettier term is hydration system).
2. I absolutely need a new battery for my cell phone: my current ancient battery is in the midst of a cascade failure. I was supposed to go out and buy batteries and a portable charger today, but I collapsed and went to sleep instead.
3. My awesome New Balance walking shoes are perfect for two-hour walks, but they get tight in the toes as my feet swell during longer-than-two-hour walks.
4. We didn't make seven hours today, which had been my goal, but nearly five hours turned out to be quite enough.
5. If my lower back is responding this way to a light encumbrance, I need to be cautious about how I handle heavier encumbrance (35 lbs., 16 kg).
6. For long walks, I definitely need to get back to wearing my Spandex biker shorts to avoid the constant chafing of the inner thighs and nethers.

I began sincerely to wonder whether I'd even have the pain tolerance to withstand 20-some days in a row of this sort of walking. It's funny, too, because today's walk was largely on level ground: hills that stymied me on a bike were barely perceptible as hills when on foot. I suspect I'm going to have to reorient my training program to account for the need to toughen up my feet, and I may have to take my shoes to a shoe guy to get them stretched. Shoe stretching is apparently common and easy to do; there are, in fact, plenty of in-home methods for doing it, but I'd rather get a pro to reshape my footwear.

Brian and I met this morning at National Assembly Station way out in Yeouido, the same station where I get off to do my KMA gigs. My travel companion was as athletic as I expected him to be; I was the slowpoke during our walk, but he politely restrained himself from walking at what I'd guess is close to a natural pace of 4.5 or 5 miles per hour (I mosey along at a human-standard 3 mph, unlike most Koreans, who walk at Brian's speed).

We began at 7AM by walking toward the National Assembly building; the guards there let us through so we could walk across the property and out the back in order to swing by one of those bike-path "certification centers." Sure enough, we found it: 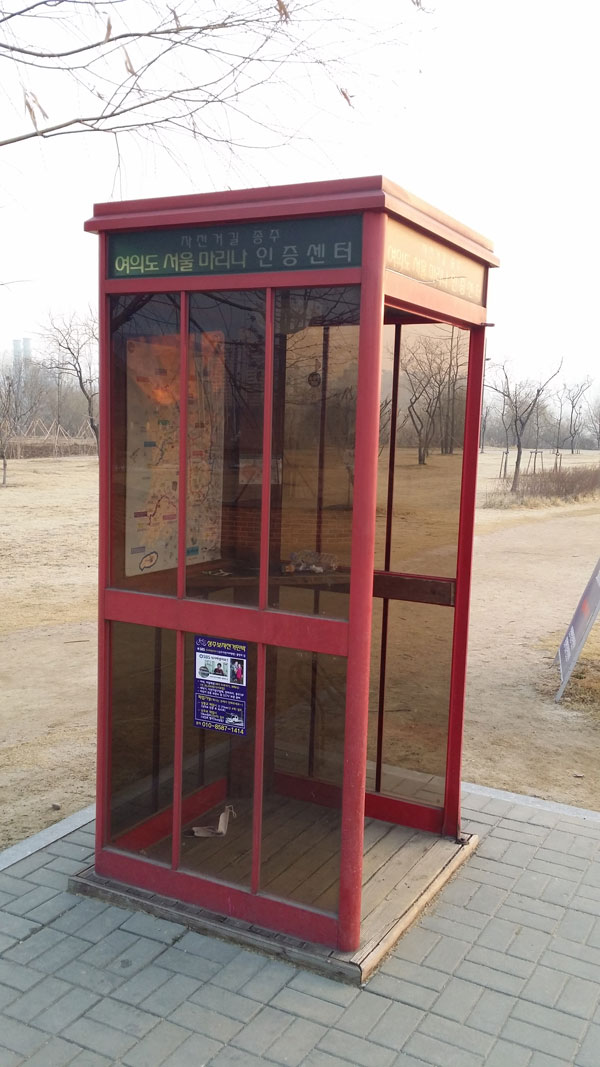 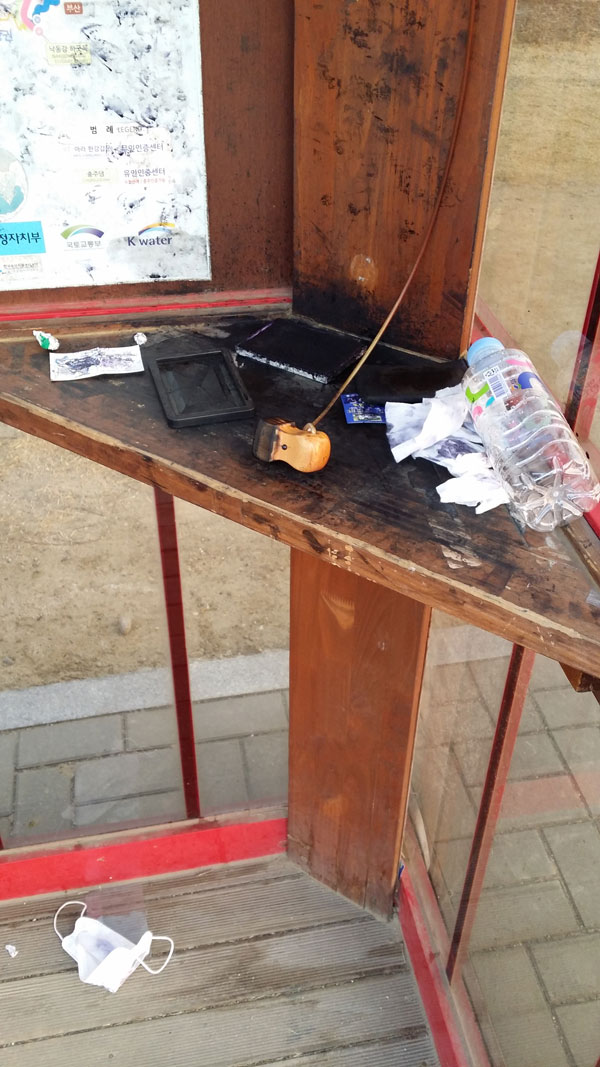 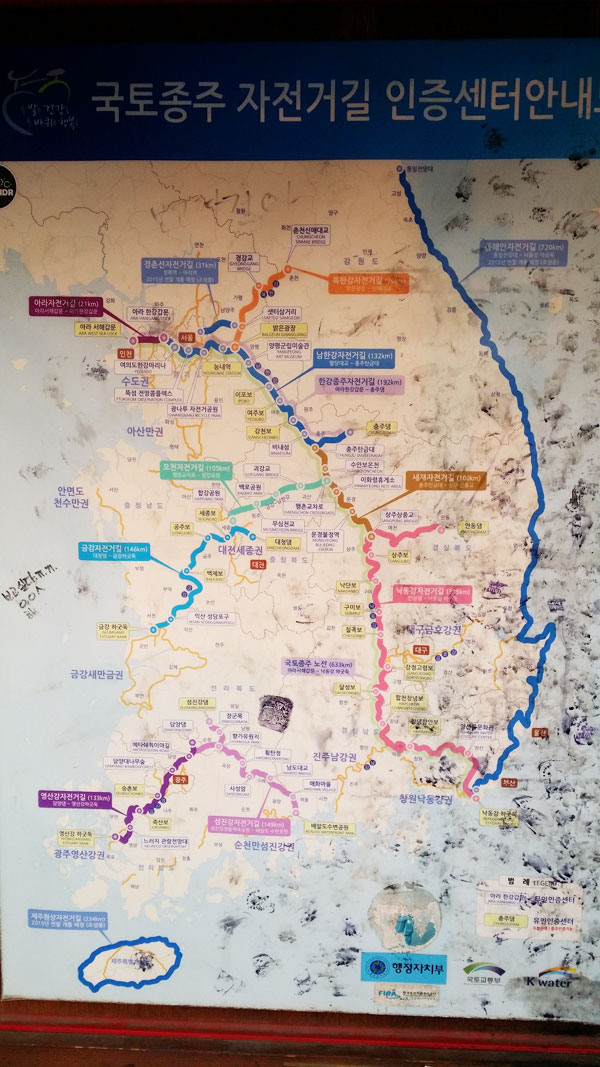 The term "center" seems a bit pretentious for a one-square-meter patch of ground that contains little more than a seedy, phone-booth-like structure. Still, it made for an interesting landmark, after which we continued east along the Han. Brian's vigorous-yet-restrained pace kept him slightly ahead and me slightly out of breath, but it was a good workout. While my phone had power—which came and went the entire hike—I pinged our location a few times to provide some idea of our pace.

Ultimately, as we approached the Jamshil area and my apartment, we decided to change plans and head to my place for a fried-rice lunch (Brian ended up kindly giving me his lunch as well: a Paris Baguette chicken sandwich). I had thought we might eat lunch, then head out and check out the Yangjae-cheon, i.e., my creekside route, but we both ended up too achy and unmotivated to continue. For a flat walk, the experience seemed unwontedly harsh on my feet, which is an indication of which body parts actually require more serious training.

Brian turned out to be a great font of information and an excellent conversationalist, so while we had some moments of silence along the path, there was also plenty of banter. I learned a few things about the local flora and fauna; we both had a chance to look with distaste upon a garbage-strewn grassy area being cleaned by a woefully understaffed team of men, but we also passed by plenty of clean, well-groomed areas. I learned some things about Brian's wife and son; his family leads an interesting life. Here's pic of Brian: 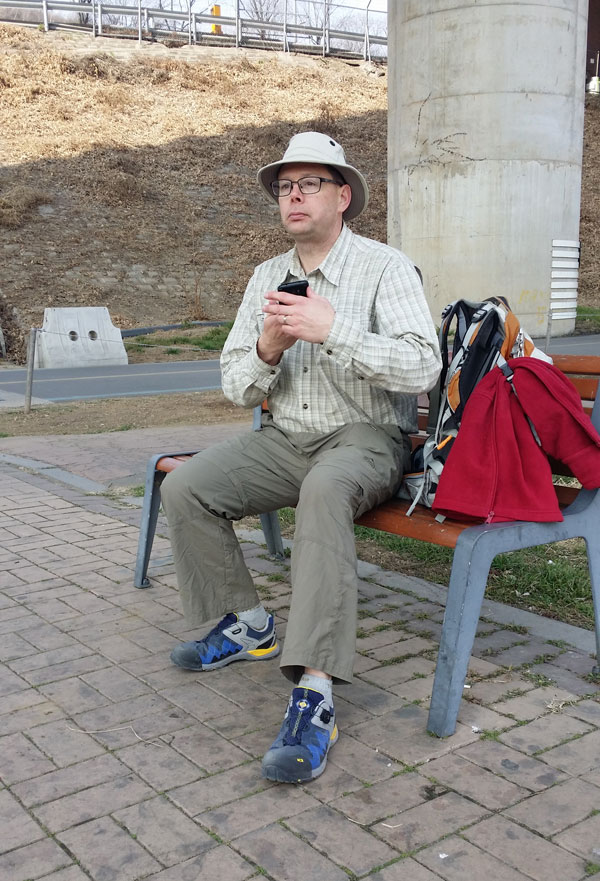 All in all, this was a fun—if exhausting—day. It was good to meet someone that I had known for years only through blogging, and I do believe we'll be meeting up again.