Walk Thoughts #14: I have to walk on that

Weirdly, my left foot hurts just as much but is showing no blistering or purpling. I'm able to walk without limping too overtly, but I don't think I'll be doing my creek walk tonight. Will more likely switch to building-staircase work. 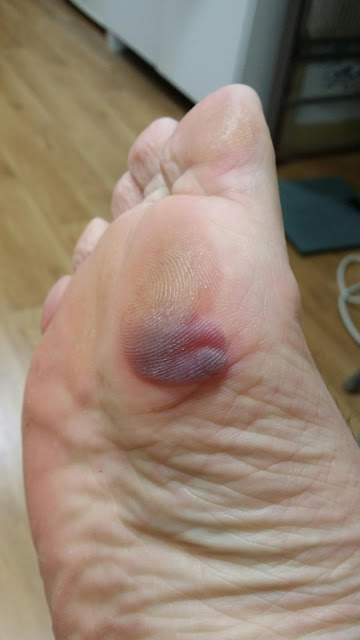 I've had blisters like this before, and I've found the best thing to do is simply to walk on through them. There's a lot of nonsense literature out there about moleskin and so on, but I find that Mother Nature is enough of a self-correcting system that you can just keep on walking whether the blisters pop or not. If they pop, just don't mess with them.

Had you asked me yesterday afternoon whether I'd be able to stand 20-some days in a row of hiking that might produce such blisters, I'd have been tempted to say, "Hell, no." Today, after a day's rest, I can answer in the tentatively affirmative. I might be limping slowly by the end of each day, and a projected six-hour walk might stretch into ten hours (of walking plus taking breaks), but as long as I can rest for most of a day between walks, I think I'll do just fine, and my feet might even toughen up as we go along.

Brian had floated the idea of wearing walking sandals yesterday; it's a thought, especially for my pinky toes, but I'd be concerned about all the grit getting under my feet while on a dirt path (a few stretches, yesterday, were dirt paths); pebbles and grit can produce a much more distracting pain than blisters can.

One project for this week: get my shoes stretched—both my New Balances and my Rockports.

UPDATE, 9PM: I'm walking more or less normally, despite the nasty fellow in the above picture. You can indeed get used to the pain, which dovetails with what I remember from my 900-kilometer walk in 2008.