My Seoul-Busan walk is a go, according to my very understanding boss. This is fantastic news, and it gives me a new sense of purpose. Korea might go to hell in a handbasket this year thanks to the country-sundering, dragging-through-the-mud embarrassment of President Park Geun-hye's ongoing impeachment, but I'm going to be doing just fine as I prep myself to accomplish a very specific goal: a 500-600-kilometer walk from Seoul to Busan. While much, much smaller than the sea-to-shining-sea walk across the US mainland that I had envisioned years ago (and only about half the distance I actually walked over a period of three months in 2008), this will still be a worthwhile endeavor, and May will be the perfect month in which to do it. I'm excited.

I'm excited, too, because I learned many lessons from the 2008 walk that can be applied to this upcoming one. I consider myself a fairly experienced hiker and camper, at this point, although by no means a year-round, "seasoned" veteran. That said, I did do plenty of winter camping at my parents' house during the winter from late 2008 to early 2009, while the house was being renovated and I had no bedroom to sleep in, so I've got some cold-weather camping experience under my belt along with warm- and hot-weather experience (I even have some embarrassing wind-related camping experience).

Also important is that tech has improved since 2008, thus making the documenting of my hike even easier to accomplish. I have a nice smartphone, now, not a slowpoke Blackberry. And while I'm no longer on Twitter, I am on Gab.ai (alternatively known as Gab AI), where I'll undoubtedly be live-gabbing my experience every day.

Some of the more worrisome issues have already been solved by the nature of the path itself: the rest areas spaced along the path have free camping, and they also come equipped with Wi-Fi and what I assume are phone-charging stations, so getting my message out won't require me to use too much allotted cell data. If phone-charging isn't possible at every station, I plan to have a portable charger with me—another innovation that was only in its infancy in 2008. (Back then, I tried using a solar charger, but that ended up sucking, so I don't trust solar chargers these days. If you think I'm wrong and know of an absolutely reliable solar charger that also works very well in less-than-optimal light, let me know.)

Another issue I'm pondering is food. I want a 21-day supply that is light, not too bulky or heavy, and easily disposable in a standard or "green" way. I'm looking at Soylent, the meal-replacement drink, as one possible food to take along. I'm also looking at Survival Tabs, and lastly, I'm looking at good ol' US Army MREs. I suspect the MREs will be the bulkiest, but I'll tell you more as I explore each of these products.

For water purification, I've got a LifeStraw, but I regret having purchased it before having seen the awesome and well-reviewed Grayl, which is a hiker's dream come true. I'll probably be ordering that soon, along with a spare filter or two.

Other prep will involve training my body; I'll be continuing the walking, but will likely increase my distance until I'm routinely doing 17 miles a day—a distance I had been walking for a while last year (a few miles during work hours, then the rest at night). I need to be able to hike 17 miles a day for 21 days in a row before I get on the trail: there's no other way to find out whether my knees can take the strain. I also need to plan for the fact that a quarter of the trail will be steep because it leads up and over the Baekdu Daegan mountain range. My creekside-path staircase work will be very useful in that regard. I also have to consider what it'll be like to walk while encumbered, so a good bit of my training will be devoted to the health of my back and the rest of my upper body. If I join my building's gym, I'll likely work further on leg and core strength there.

Then, of course, there's the research. I have many, many questions about the Four Rivers Project trail, especially as relates to the exact distance between rest stations. If the stations are truly spaced about 15-20 km apart, I think I need to hike at a rate of about two stations per day to remain on schedule and finish the whole walk within 21 days. At a minimum, then, two stations will mean a 30-km walk; at a maximum, the distance will be more like 40 km. In miles, that's 18.6 miles and 24.8 miles, respectively: 7 to almost 9 hours' walking daily, not including breaks. Honestly, I'm not sure I can manage those distances 21 days in a row, so what's likely to happen is that I'll end up camping just off the path, between stations, on alternating days. Again, we'll see: I'm thinking this through without having done the actual research yet, so I'll come back to this topic when I've got concrete numbers to work with. There's a tourism office close to where I work; strangely enough, it's located under a bridge, like an orc enclave, but I'll give it a visit one of these days and see how many of my questions can be answered there.

I do also plan to walk part of the trail as an initial reconnoiter. Blogger Brian Dean has offered to walk with me; I don't know whether he has the time to walk all the way out to the first rest station and back, but that's what I'd like to do. That in itself will be a 30-40-kilometer trek—a good day's walking. If Brian does want to do this with me, we'll likely have to start pretty early in the morning so as to get back to our respective abodes at a reasonable hour. (You up for this, Brian? Probably won't happen until March-ish, as per your comment.)

There's a lot to think about, but my brain is on fire, and I believe this is eminently doable.

ADDENDUM: here's a map for you to stare at. The dots along the Seoul-to-Busan path appear to be the rest stations, and they do indeed seem fairly evenly spaced along the way. There are about 24 rest stations—depending on how you count them—going from Seoul to Busan (the north end of the trail seems to start west of Seoul, in or near Incheon; I'm not counting that part: I'm planning to hit the trail from Seoul proper). If the stations are all 20 km apart, that's a walk of about 500 km (24 x 20 = 480, plus 20 km for the initial stretch before the first station). This corresponds to what most bikers say the path's length is, i.e., approximately 500 km. The one biker I followed gave a figure closer to 580 km, but part of that number may be because he got turned around, at one point, having circled a mountain instead of having followed the trail the way he was supposed to. 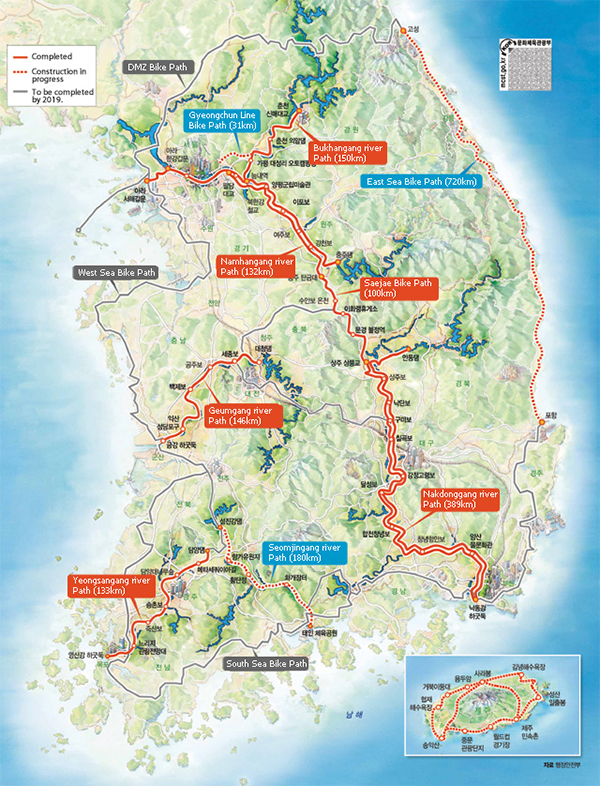